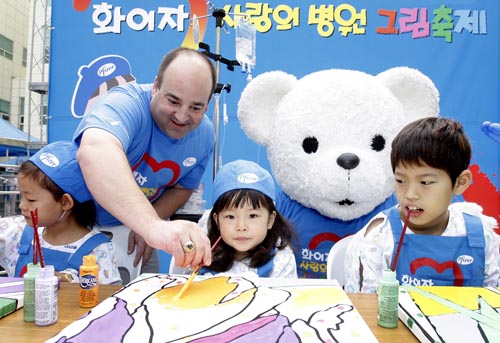 
Hospitals, though they are places of healing, do not often provide a welcoming environment for patients, staff or visitors.

The Foundation for Hospital Art has set out to change that by putting pictures on blank hospital walls to make them more inviting.

Continuing that work, it recently held a series of events in Korea, offering art workshops and inviting people to jump in and paint. The events were held at three hospitals and one facility for the disabled in Seoul, Gyeonggi and Busan from June 1 to 10.

Sponsored by Pfizer Korea, the “Pfizer Paint Fest” has been held annually since 2002.

“Our purpose is to really be with patients in hospitals, and while patients go to hospitals for healing physically, it’s a very mental place,” Scott Feight, the FHA executive director, said in an interview with the Korea JoongAng Daily. “People get sad and depressed so our goal is to bring the outside in.”

The interview took place during one of the events at Hallym University Medical Center, where hospital staff, including doctors and janitors, painted alongside patients, the majority of whom were children.

Feight has had a close relationship with Korea over the years. He was stationed here while serving as a U.S. Army helicopter pilot following his graduation from West Point. He started working with the foundation five years ago. Last year, he took over his current position from his father, who founded FHA in 1984.

Feight said the paintings help patients by giving them something that they can’t see within the boundaries of the hospital. He also said that by improving the hospital environment, the paintings also help hospital employees by brightening their workplace, enabling them to provide better care to their patients.

The partnership between the foundation and Pfizer Korea began 10 years ago with John Feight, who retired last year. Together, they have organized painting events at 30 hospitals and two facilities for disabled children.

Feight said the support from Pfizer Korea has been exceptional and that many Pfizer employees volunteered to help organize the event. He also noted that Korean people were very supportive of these efforts, as he has seen more family members at Korean hospitals than in other countries.

Feight said that painting always helps ease patients’ pain by giving them something else on which to focus. “I have painted in numerous places, and inevitably, there’s always [at least] one person that comes up to me and says that they have found their purpose in life,” Feight said. “I think we are inspiring people, as we believed in it and just went ahead and did it.”