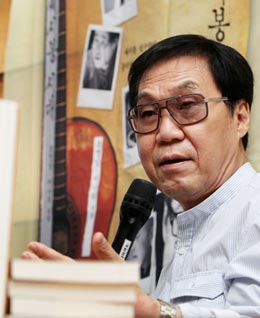 Cho Young-nam talks about his new book at a press conference in Jeong-dong, central Seoul. [YONHAP]

Cho Young-nam, 66, is a legend for pioneering folk rock in Korea and his association with C’est Si Bon, which was a popular music hall during the 1970s and 1980s. Since then, Cho has become known as a painter and popular television and radio personality. With the recent publication of a new book about the music hall, he can add the title of author to his long list of credits.

The book, “The C’est Si Bon Era,” covers the Korean pop music scene from the ’60s to the ’70s. Its publication follows the release of Cho’s album, “Cho Young-nam, Song and Life,” in December and a subsequent series of concerts.

Cho made his debut as a singer in the late 1960s at the now defunct music hall C’est Si Bon, which was located in Mugyo-dong, central Seoul. The club was a place for both live and recorded music and attracted young people looking for modern pop, most of which was from the West.

Cho’s new book focuses mainly on his life as a musician during that time and draws on the memories of the singers who were at the forefront of pop music back then, including Song Chang-sik Yoon Hyung-ju of the duo Twin Folio, Song Chang-sik, Kim Se-hwan and Lee Jang-hee. The book was co-authored by JoongAng Ilbo journalist Lee Na-ri.

In the book, Cho writes about the struggles that he and his fellow musicians went through as they tried to generate interest in folk rock.

He spoke about the book at an event last week celebrating the book’s publication.

“The music within us is brought to light through this life,” he said. “Through my book, I wanted to tell the story of C’est Si Bon and show how we lived fiercely with music.”

Cho has since formed a band called C’est Si Bon with Song and Kim. At the book’s launch, the group offered a rendition of the hit ’70s song “Our Story.”

“I’m a bit embarrassed by the fact that we sang covers of Western music in the beginning,” he said. “But C’est Si Bon was significant for bringing pop music to Korea, which had an effect on Korean culture as a whole.”

Many people see Cho as the leader of the band C’est Si Bon, but he is a bit more modest about his role in the group.

“There is no such a thing as leadership in C’est Si Bon,” he said. “The key to our success has been that we know how to have fun when we’re together.”

The book also contains an account of Cho’s relationship with his ex-wife, actress Yun Yeojeong. The couple had a well-publicized and tumultuous relationship until their divorce.

“C’est Si Bon was a historical place as well as a music hall,” Cho writes in the book. “It is where I met my ex-wife, who I dated, got engaged to and married and who gave birth to two children with me.

“The part I dedicated to Yun was a source of trouble for me when I was writing the book,” he said. “But I had to mention her because the C’est Si Bon story would not be complete without her.”