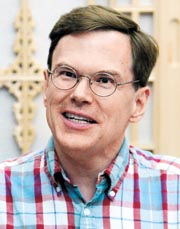 Robert Fouser, 50, a professor of Korean language education at Seoul National University, has joined the movement to preserve Korea’s hanok, or traditional houses, by helping to start an organization of hanok owners in Seochon, central Seoul.

The group, the Seochon Living Environment Research Association, seeks to preserve the traditional Korean houses and prevent indiscriminate development. Its 10 members include an architect, a cinematographer and a homemaker. Fouser was made president of the group at its first meeting on Sunday.

“Pilundae-gil in Nuha- dong once provided an elegant view of Seochon Hanok Village with Mount Inwang behind it. But skyscrapers have been going up for a few years, destroying the view,” Fouser said in fluent Korean. “We need to prevent the destruction of Seochon.”

Since March 2010, Fouser has lived in a 24-pyeong (79-squaremeter) hanok in Bukchon, Gye-dong, central Seoul.

The JoongAng Ilbo talked with him about his work with the association.


Q. What prompted you start the association?

A. When I was living near Pilundae-gil in 2009, I loved taking walks and enjoying the scenery of Mount Inwang. But early last year, a seven-story building was built there, ruining the skyline. I filed a complaint with the district office but they said that the building was permitted according to construction laws. Even now, there are several buildings going up in Seochon. I didn’t want to see that and was frustrated that Koreans don’t seem to recognize the importance of traditional culture. I also thought that if a foreigner got involved, it might attract more attention.

What do you think about the argument that hanok preservation can infringe on property rights?

Yes, a hanok is private property. But public purposes are important as well. Even in the United States, where private property is well-protected, new construction is subject to strict regulations. It’s the same for Paris. Decisions are made at the national level. But in Korea, district offices or city halls are in charge.

I lived in a traditional Japanese house in Kyoto when I was little, when my father, who was a soldier, was stationed there. In 1988, I lived for about a year in a hanok in Hyehwa-dong, Seoul. I fell in love with hanok, which allow residents to appreciate the changing of the seasons so well.

What are the association’s plans?

Last year, Seoul announced a plan to preserve Seochon Hanok Village, under which an area near Seochon would be reserved for hanok. According to the plan, only a hanok can replace a hanok. But new construction projects were allowed before the plan was announced. We are going to study foreign cases to come up with ways to solve the problem.