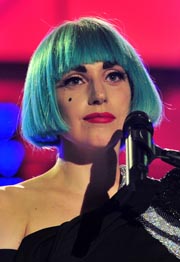 ROME - Lady Gaga sang a few bars of her smash hit “Born This Way’’ and demanded the end of discrimination against gays as she proclaimed herself a “child of diversity’’ at a gay pride rally Saturday night in the ancient Circus Maximus.

The star, whose “Born This Way’’ album topped 1 million sales in a week, delighted tens of thousands of people at a brief concert in the vast field where the ancient Roman masses would gather for spectacles.

Wearing a green wig, she played the piano and sang a few numbers. But she devoted much of her appearance after an annual European gay pride parade to denounce intolerance and discrimination against gays and transgender people. Among the places she cited was the Middle East, Poland, Russia and Lithuania. Decrying intolerance of homosexuality, Lady Gaga lamented that young people who are gay are susceptible to “suicide, self-loathing, isolation.”

Many in the crowd had participated in an hours-long parade of colorful floats and brightly costumed marchers through Rome’s historic center before the rally. Lady Gaga praised her audience for its “great courage’’ which she says inspires her.