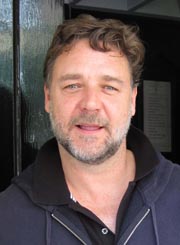 LOS ANGELES - Russell Crowe apologized Friday after an apparent anti-circumcision tirade on Twitter, as a Jewish friend he was exchanging tweets with defended him.

While the friend, Jewish film director Eli Roth, said the remarks had been blown out of proportion by journalists, the Oscar-winning actor took down a series of entries on his Twitter feed from Thursday, and said he was sorry to anyone he had offended.

“I have a deep and abiding love for all people of all nationalities, I’m very sorry that I have said things on here that have caused distress,” he wrote on the microblogging Web site.

“My personal beliefs aside, I realize that some will interpret this debate as me mocking the rituals and traditions of others. I am very sorry.”

In the original tweets, reported by the Hollywood Reporter among others, he wrote: “Circumcision is barbaric and stupid. Who are you to correct nature? Is it real that GOD requires a donation of foreskin? Babies are perfect.”