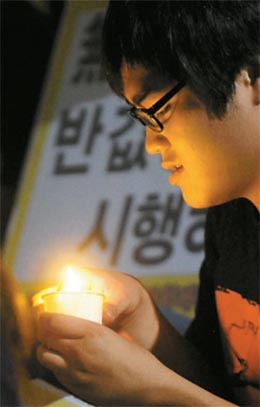 A college student holds a candle Friday night at a rally to demand lower tuition. [NEWSIS]

Thousands of students and other people protesting high college tuition staged a series of candlelight vigils over the weekend, including a 5,000-strong rally on Friday, claiming tuition is a matter of survival to them.

Since the first protest on May 29, the rallies, dubbed the “candlelight vigils for half-priced tuition without any conditions,” have been held daily, although the sizes have varied.

Police have not given approval for the rallies at Cheonggye Plaza, central Seoul, but they have allowed the peaceful rallies to proceed. However, the police presence at the scene has been strong. On Saturday, about 200 protesters gathered there without conflict against 1,800 police.

On Friday, around 5,000 students, parents and civil rights activists gathered at around 7 p.m. for the 13th candlelight vigil at Cheonggye Plaza. Some liberal political figures were also there celebrating the 14th anniversary of the June 10, 1987 democratization movement.

There were few clashes between demonstrators and the roughly 1,200 policemen there until about 70 students tried to storm the Blue House at around 9:00 p.m., demanding President Lee Myung-bak keep his pledge from the 2007 presidential election to cut tuitions in half.

Police arrested 72 university students and they are under investigation at eight police precincts in Seoul.

After the event finished at around 10:40 p.m., about 2,000 demonstrators paraded near Gwanggyo, a bridge near Cheonggye Plaza, but dispersed at around midnight without conflict with police.

“Paying tuition doesn’t stop at graduation,” Park Hui-jin, head of Korea Youth Solidarity, said in a speech on Friday. “If young people can’t pay their student loans, they will be labeled a ‘credit delinquent.’ But in today’s economy, most university students can’t find a job after graduation. This is the reality for Korean students.”

Lee Jung-hee, floor leader of the Democratic Labor Party, said, “We can no longer delay discussion about lowering tuition. We will talk about this as one of the key issues at the National Assembly’s extra session in June.”

Said New Progressive Party floor leader Cho Seung-soo: “Along with high tuition, we should discuss the overall state of university education in Korea.”

In interviews with the Korea JoongAng Daily, students and parents at the rally said the cost of higher education is of central importance to their lives.

“My parents can’t afford my tuition so I have been paying it all, which is a big burden for me,” said Lee Ho-min, 25, who attends the Korea National University of Arts.

Lee said he was forced to suspend his studies for nearly two years to make money.

“It’s about 6 million won ($5,540) per year, and I’m now doing part-time jobs almost every day to pay for it,” Lee said. “Although the government is trying to reduce the interest on student loans, it will still take a long time to pay them off after graduation unless I’m employed by a big company. I hope tuition will be reduced at least by half.”

Lee Ji-hun, 25, a student at Korea University, said, “Although my parents are paying my tuition, which is about 7 million won per year, I always feel sorry for them. I think cutting tuition is important, but there are other problems that need to be solved in universities, such as increasing the number of faculty members on campuses. In my university, professors are really busy, giving both undergraduate and postgraduate lectures and also doing administration, which results in declining teaching quality.”

Jeong Sang-hui, a 53-year-old mother whose son is a senior at a sports college, said about 15 million won ($13,850) per year goes into raising her son, including tuition.

“The total amount in tuition I’ve had to pay for four years is huge,” Jeong said. “I think it’s problematic that universities are spending their reserve funds for other purposes, not for helping students financially. I saw lots of boys suffering from repaying student loans.”

Gong Jae-gyeong, 49, a father of two sons, said, “I’m paying about 12 million won for my first son, who is freshman. But my younger son will attend university next year and the amount I pay will double. I think universities should be transparent about their budgets.”