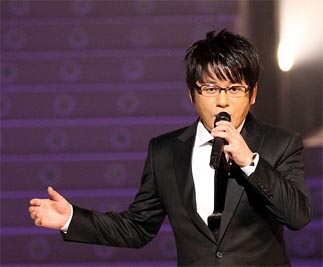 Singer-songwriter Shin Seung-hun celebrated his 20th anniversary with a tour that wrapped up with a concert in Seoul last weekend. [JoongAng Ilbo]


Singer-songwriter Shin Seung-hun is known as one of the most active singers in the adult contemporary music scene, which has long struggled for recognition amid the excitement and glamour of K-pop.

But his recent tour and a new gig as a judge on a talent search show has raised his profile and brought new attention to his music.

Shin’s tour was launched in celebration of the 20th anniversary since his debut. Starting last November, the 43-year-old toured 14 cities in Korea and did concerts in New Jersey and Los Angeles, staging 35 performances for a total of about 80,000 people.

Shin, who is known for singing songs about love and the beauty in life, wrapped up the tour last weekend with a concert entitled “Grand Finale” at the Sejong Center for the Performing Arts.

Ilgan Sports, a sister paper of the Korea JoongAng Daily, sat down with Shin prior to the “Grand Finale” concert and talked with him about his career and recent tour. Here are excerpts from the interview.


Q. How do you feel about your “Grand Finale” concert?

A. I had one of my concerts at the Sejong Center about 15 years ago. I was the first Korean singer to be allowed to do a concert there. (The arts center primarily presents classical music concerts.) For this reason, the venue is very special to me.

In this concert, I was accompanied by an orchestra of 50 musicians and we’ve been rehearsing for the past two months.

What drove you to launch the tour?

One day I looked back on my career and I realized it was the right time for me to do it. And though I hope to celebrate my 30th anniversary with a tour, it may be difficult for me to do by then.

What kind of 20th anniversary did you envision when you made your debut?

I didn’t expect it would be this big. I imagined it would be a small affair with a few fans. It’s a great pleasure for a singer to have a concert on this scale with such a large audience.

What does your 20th anniversary mean to you?

I’m fortunate to have been able to express so many of my musical ideas through my albums over the years. (Shin has 21 albums to his name.) I want to keep moving forward and making music. I also hope to become an inspiration to younger singers.

You’re one of the judges on MBC’s “Star Audition: The Great Birth.” What made you decide to do the show?

Adult contemporary music has long been an afterthought on TV. (Most music shows are dominated by pop bands.) But this show features music from my generation and it is broadcast in prime time, which was significant.

And the best thing about the show is that it gives me a chance to communicate with a broader audience.

What are the criteria you use as a judge?

I’m not looking for someone who can top the charts but someone who has the potential to be a good musician. I’ve also told contestants they have to see the big picture. Instead of being obsessed with winning, they have to focus on the whole process of becoming a musician.

What are your thoughts about the other music competition programs that have aired recently?

There are pros and cons, but I’m glad that most of these programs focus on finding people who can really sing. Some contestants have also inspired the teenagers in the audience to learn how to play the piano or guitar. This is meaningful because people can learn the basics of composing by learning to play musical instruments.

Do you have any plans for another album?

I’m working on a project that will be released this year. After that, I’ll release a new album of my own. Expect to hear a whole new side of Shin Seung-hun.