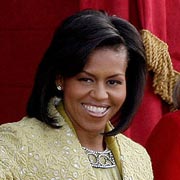 LOS ANGELES - First Lady Michelle Obama urged Hollywood on Monday to showcase the strength of U.S. service families, as she used a trip to Tinseltown to support those with loved ones in the military.

Obama appealed to writers, producers and actors to use their creative skills to depict the reality of life for families of those in war zones.

“Move us. Move America to think differently about these families that serve America so graciously.”

“We are big fans of iCarly. This is an example of the way that we can integrate these story lines into shows, and it’s important for kids to hear themselves in the shows that they love,” she said ahead of the taping.

“I’ve been memorizing my lines - I am terrified,” she added, to laughter. “I can give a speech, I can talk to you all, but oh, I’m shaking, yes.”