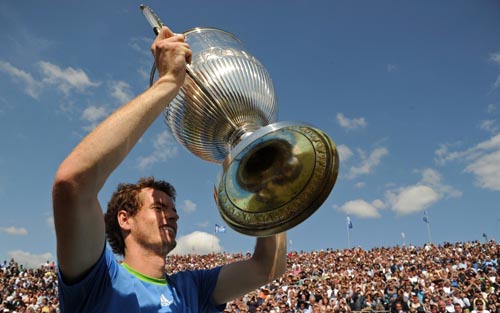 Andy Murray of Britain holds the Queen’s Cup trophy after winning his singles final match against Jo-Wilfried Tsonga of France at the Queen’s Club Championships in west London on Monday. [REUTERS/YONHAP]


LONDON - Briton Andy Murray withstood an athletic onslaught from Jo-Wilfried Tsonga to beat the Frenchman 3-6, 7-6, 6-4 and win the final of the Queen’s Club Championships on Monday.

The climax of the Wimbledon warm-up event was being held a day late after rain washed out play on Sunday and, while conditions stayed dry, Murray weathered the storm of Tsonga’s fast groundstrokes, diving volleys and energetic charges.

“He was playing a different sport to me in the first two sets. I’ve never seen anyone dive so much,” the world No. 4 said in a courtside interview.

Murray, who picked up his second Queen’s trophy, goes into next week’s grass-court grand slam at the All England Club having given the British public and media even more reason than usual to set expectations high.

After defeating Andy Roddick in the semifinals, Murray was forced to play a different game against Tsonga, who hurled every imaginable shot at the Briton while also throwing his body across the court.

The Frenchman’s high-risk strategy of attack looked like it was paying off until an unlucky net cord in the 11th game of the second set prevented him from breaking to serve for the match.

The ball bounced off the top of the net and had looked like it would make it over the net before dropping down on the wrong side in what was a major turning point in the match.

“I remember only this ball,” Tsonga said on court. “Today I had only one chance, it was this one but I missed it. But today Andy was just too good and I will try to beat him next time.”

Fifth seed Tsonga had lost to Murray in the quarterfinals at last year’s Wimbledon and he found himself lacking once again as the Scot drew on his experience of three grand slam final appearances, as well as his passing shots, to see him through.

Murray also gave the Frenchman a taste of his own medicine with some outlandish shots of his own.

His first between-the-legs forehand was unbelievably batted back by a diving Tsonga in the second set but the second time he tried the trick, he won the point at the net to go up 5-3 in the final set.

Having won the second-set tie-breaker with ease 7-2, Murray carried his momentum through the third set where he dominated and wrapped up the title with a seemingly heartfelt smash as Tsonga’s tenacious challenge came to an end.

“He’s so much fun to watch, I enjoy watching him myself but he wasn’t fun to play today,” Murray said of his opponent.

“It’s been great preparation this week [for Wimbledon] and I’ll work hard for the next five or six days to get ready.”