Half-price offers are too good to be true

Half-price offers are too good to be true 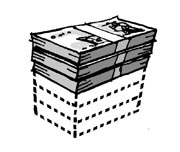 We all love half-price deals. But half-price offers are often too good to be true. If you ever hear about a half-price deal, you should be cautious. When a shoe company has a 50 percent off sale, the sale items are the leftovers that have fallen out of fashion or are unpopular designs that will never be sold at the regular price. Keeping such products would only take up precious storage space, so the company decides that it is better to cash out by offering discounts.

In politics, half-price deals are often offered based on ulterior motives. In this case, it becomes necessary to look at who is paying for which half. Sometimes, the entity paying the price changes but the total social cost remains the same.

The Grand National Party’s half-priced tuition offer is a good example of this. The party has made little preparation for the drastic deal, and if tuition is cut in half, you can assume that the other half will be paid by taxpayers.

Last year, the big issue that made headlines was the issue of half-price apartments.

The GNP’s preparations for its half-priced apartment offer began in spring 2009. In his Liberation Day speech, President Lee Myung-bak talked about “an epoch-making housing policy for citizens who do not own homes.” Not long after, the Ministry of Land, Transport and Maritime Affairs announced that it would build housing on sites where the Green Belt restriction was lifted.

In a normal market, half-price products do not exist. Therefore, administrative authority and tax money, which later became the deficit of the LH Corporation, were mobilized. The half price deals were only possible when the Green Belt restriction in the pricey Gangnam region was removed. Finally in spring 2010, apartments became available in Segok-dong in Gangnam District and Naegok-dong in Seocho District.

The apartments were offered at a little over 10 million won per 3.3 square meters through a lottery system. Once you were chosen to buy an apartment, you were instantly guaranteed a discount of 50 percent. The trend led to an unusual increase in demand for apartments, but people didn’t re-sell the apartments, leading to a housing shortage. The deal was just another case of a half-price deal that was too good to be true.

I hope the GNP will prepare something better to resolve the tuition issue before it, too, gets out of hand.