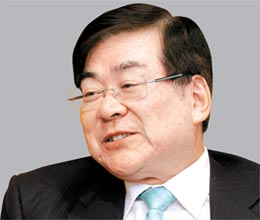 The competition to host the 2018 Winter Olympics is like a marathon with just one gold medalist, says Cho Yang-ho, chairman and CEO of the Pyeongchang 2018 Olympic and Paralympic Winter Games Bid Committee, ahead of the International Olympic Committee’s decision on July 6 in Durban, South Africa.

In an interview with the JoongAng Ilbo on May 30 in his office at Korean Air headquarters in Seosomun-dong, central Seoul, Cho explained Korea’s ambitious plan to host the games on Pyeongchang’s slopes. Although foreign media have mentioned Pyeongchang as a competitive candidate city, Cho was cautious about declaring success.


Q. There’s only a month left before the IOC’s final decision. How are you wrapping up your activities as head of the committee?

A. I think keeping up the pace until the last moment is important. However, I have put in all my efforts to bring the Olympics to Pyeongchang. Competing for the right to host the Olympics can be compared to running in a marathon. But in this race, there’s no silver medal. There is only one gold medal. You shouldn’t lose your pace until the end.

Have you faced difficulties in the job?

Actually, the head of the Pyeongchang bid committee isn’t officially recognized by the IOC. I can’t visit IOC members, nor invite them to Korea. I was permitted to approach them only when the IOC members attended some official events that I also attended. I’m planning to meet them at the end of June at the Special Olympics World Games 2011.

It seems IOC members liked Pyeongchang when they came to conduct an on-site evaluation in February.

When I hosted the delegation, I treated them as if they were my own valued passengers [on Korean Air]. More than 90 percent of Pyeongchang’s local residents supported the Olympics bid and they welcomed the IOC members when they arrived, which seemed to move them. Local children, who can barely speak English, were chanting “Pyeongchang! Pyeongchang!” to demonstrate their support to the members. We also served them delicious traditional Korean dishes.

Pyeongchang’s slogan is “New Horizons.” How do you explain the slogan’s meaning to foreigners?

Korea is expanding its influence in winter sports, and I think Korea can be a center of winter sports in Asia. Although the two other candidate nations, France and Germany, have the Alps, I think Korea’s Taebaek Mountains are also fully qualified as a venue for the Olympics. Furthermore, we have the passion of Pyeongchang’s citizens, which I believe can’t be compared to that in the other candidate cities.

But we shouldn’t seek any sympathy from IOC members for making a third consecutive bid to host the games. I have just been continuing to tell the IOC that they can see a “new horizon” for winter sports in Asia [by having the Olympics in Pyeongchang].

At IOC events, attendees have positively evaluated your presentations on Pyeongchang. What was the secret to their success?

Actually, I found that I kind of have stage fright when I tried to give several presentations after becoming head of the bid committee. So, to give perfect English presentations, I searched for a British speech expert, since Korean English tutors would feel uncomfortable teaching me [because of my post] but foreigners wouldn’t.

From basic pronunciation to accent, I learned everything about English. I visited Britain to take a short-term language course from morning to night. Even in bed, I practiced my English skills, sometimes shouting, to improve my voice.

Do you have any connections to Pyeongchang?

I have lots of interest in winter sports, especially skiing. My father [Cho Joong-hoon, former chairman of Hanjin Group] donated funds for Woljeong Temple in Pyeongchang when it was under reconstruction after a fire. And for this Olympics bid, monks at the temple are praying for us. So I feel as if I have some connections with Pyeongchang.

We heard you backpacked in Europe when you were a graduate student in the United States.

Yes. In 1969, I was full of pride as a Korean when I was in the United States, but after I discovered that only a few people knew about Korea, I pondered about my country. That’s the reason why I launched Korean translation services in the world’s three foremost museums - the Louvre in France, the British Museum and the State Hermitage Museum in Russia. I thought at the time how young Koreans would be delighted to find Korean language services in the world’s major museums.

You are living two different lives with your two careers. How are the two lives different?

I am a bit concerned about those who think the IOC members are most likely going to choose Korea. In this marathon, we have to pour all of our energy into it. The other candidates, France and Germany, are also doing well. I’m very concerned that I’ll ruin everything because of a single minor mistake. I’ll do my best.