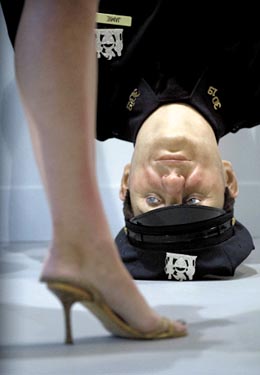 A visitor passes by a work of art by Maurizio Cattelan on Tuesday during the preview day of the Art 42 Basel fair that will run until Sunday in Basel. [AFP/YONHAP]

LONDON - Billions of dollars of art will be on show in Basel at the annual fair this week and in London ahead of a big series of sales, with experts cautiously optimistic that buyers are set to snap up rare treasures.

Art Basel, described as the world’s top fair for modern and contemporary works, opened yesterday with 300 galleries displaying works with a combined total worth of around $1.75 billion, according to specialist insurer Hiscox.

“We didn’t do a calculation last year, but my guess is that this year is up about 15 percent [on 2010],” said Hiscox fine art specialist Robert Read.

He added that the mood in the market was generally confident, with the sharp contraction in global sales in 2009 already a fading memory.

“I think we’re further away from the bad news,” he told Reuters. “People forget things so quickly. Buying art is fun and sexy, and people were never going to give it up forever, were they?”

Once the wheeling and dealing in Basel is done by its close on June 19, the focus shifts to London where rivals Christie’s and Sotheby’s hold sales where the strength or otherwise of the market will be more visible.

Christie’s described its upcoming season as “one of the company’s richest and most exciting,” and expects to raise more than 250 million pounds ($410 million) over four weeks.

The company has opened an exhibition in London this week of more than 100 works to be offered to super-rich collectors and investors, including a drawing by Michelangelo and paintings by George Stubbs, Claude Monet and Pablo Picasso.

Christie’s starts its main sales of the season on June 21 with an impressionist and modern art evening sale.

Sotheby’s expects its equivalent series to raise in excess of around 215 million pounds, including what it said could be a record auction price for Austrian artist Egon Schiele, whose cityscape goes under the hammer on June 22.

Experts said the art market has yet to regain the giddy heights of the boom that preceded the 2009 slump, although Chinese art has soared in value as wealthy new buyers compete for the top lots.

Recent examples include the $65 million paid last month for a work by Qi Baishi and the $69 million price tag on a Chinese vase dated from the 1740s, 40 times its estimate, at a sale in London in November.

Chinese collectors have also branched out into Western art and could be a major factor in the market over the coming month, although some analysts have warned of the risk of an unsustainable art rush developing.

Vikram Mansharamani, a lecturer at Yale University, recently drew comparisons between China’s influence on the art market and that of Japan in the late 1980s and early 1990s, when buyers there smashed auction records only for the boom to turn to bust.

“It reflects a national overconfidence that has been a consistent ingredient in financial bubbles,” he wrote.