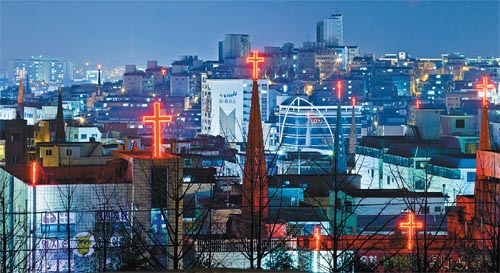 
A year ago or so, Chang Ae-ran, a 51-year-old homemaker who lives in Myeongil-dong, eastern Seoul, noticed that the bright red LED cross atop the soaring spire of a Presbyterian church right in front of her apartment building stayed lit through midnight.

The glare from the cross is so intense that when she turns off all the lights in her ninth-floor apartment, the red light permeates through the living room to create an atmosphere that she and her family are not exactly excited about.

When she couldn’t tolerate it any longer, she called the church to explain her discomfort and asked if it was possible for the church to turn off the light after midnight.

“What I thought was a minor favor between neighbors turned out to be not that simple,” she said. “The female deacon who picked up the phone only said, ‘Well, it has been our policy to leave the light on through the night. I will talk to the minister about your request.’”

Two months have passed but the church has yet to do anything to resolve the situation.

Chang is not alone in feeling uneasy about what many citizens have started to perceive as a new sort of “light pollution.” A number of people have left messages in cyberspace complaining about the LED or neon glare from church crosses.

He tried to solicit arbitration from the district office but his efforts were in vain because there are no laws against the excessive glare from church crosses in Korea.

“We have no legal mechanism to limit illumination from church crosses or the hours they are turned on in a day,” an official from the Design Planning Team at the Gangdong District Office said. “It is impossible for us to force churches into adjusting the lighting or levy a fine on churches that take it to an extreme. We can ring them up to inform them of the complaints but that’s as much as we can do at present.” 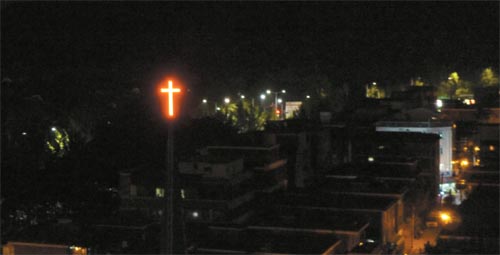 A view of a Presbyterian church from a ninth-floor apartment in Myeong-dong, eastern Seoul. By Seo Ji-eun

It was as late as September 2009 when Park Young-ah, a lawmaker with the ruling Grand National Party, proposed a bill to control the rapidly spreading problem of light pollution in Korea.

“Excessive illumination from artificial light may cause not only glare for the human eye but also confusion in the ecosystem, thus reducing agricultural production and animal birthrates and also leading to roadkill,” Representative Park wrote in the proposal. “Although different government departments have separate regulations for controlling certain lighting devices such as street lamps and outdoor advertisements, systematic control of light pollution and standards for the appropriate level of light usage do not yet exist, nor does related research.”

The proposal suggested that the government classify districts according to the amount of light they emit and impose a limit on illumination levels. For instance, mountainous areas that don’t necessarily need strong lighting would be bound to a stricter standard than that for commercial districts. The measures would be intended to reduce damage to the ecosystem, save energy and prevent global warming.

The bill, referred to as the light pollution prevention act, is still pending in the National Assembly but is expected to pass before the end of the year, according to Noh Chang-hoon, a spokesman for Representative Park.

In the meantime, the increasingly environmentally conscious Seoul Metropolitan Government enacted a bylaw in January to prevent light pollution and control urban light. Under the new rule, businesses wanting to install outdoor lighting are subject to screening by a Light Pollution Prevention Committee under the city government. The 20-member committee is composed of lighting experts and electrical engineers.

According to the bylaw, public buildings are advised to turn on outdoor lights 30 minutes after sunset and keep them on until 11 p.m. The same guideline will apply to private buildings beginning in July.

There are not yet any penalties for those who do not follow the guidelines, but calls to implement a penalty system are expected to gain strength if Park’s bill takes effect.

However, the question remains as to why city government officials continue to claim that there is no way to regulate church cross illumination, regardless of whether the bill passes. The answer: church crosses managed to break away from government control much earlier.

When revising the ordinance on outdoor signs in 2008, the government excluded “any form of religious outdoor installment that does not flicker” from the list of outdoor signs to be regulated. Instead, religious outdoor installments were placed under the “monument” category. That means that even if the light pollution prevention bill is enacted, monuments will still be free from legal control.

Some liberal media outlets recently reported that Christian lobbying groups backed by the Lee Myung-bak administration’s pro-Christian tendencies were behind the government’s visibly lenient regulations of church crosses. President Lee is an elder of Somang Church, a Presbyterian megachurch in southern Seoul.

Some conservative Protestant groups claim that regulating outdoor crosses is akin to “denying the existence of the church.” Kim Un-tae, head of the Christian Council of Korea, one of the biggest Christian groups in the country, said earlier, “Recognizing the crosses that light up the dark world simply as a sort of light and trying to regulate them is foolish. It’s a move to incapacitate Korean Protestantism.”

A few city government officials said on the condition of anonymity that the city has faced fierce protests from powerful Christian groups that are opposed to attempts to regulate illumination from outdoor crosses.

“We definitely want to restrict excessive illumination from church crosses, just as we do with large neon signs and LED lights installed on the exteriors of motels, noraebang [singing rooms] or other types of adult entertainment establishments. If any of them disrupts the harmony of the cityscape, it should be corrected,” a high-ranking Seoul city official said. “But we can do nothing about the churches at this moment, and I think some Christians are being extremely selfish. Honestly, I don’t believe the brighter the cross, the closer we get to God.”

Phae Chae-gun, professor of environmental engineering at Seoul National University of Science & Technology, said, “Should any outdoor light installations do harm to area residents, there should be no exceptions in restricting them and the government should take the appropriate action.”

Lee Maan-ee, former minister of environment and a Protestant himself, also expressed concerns about the excessive glare from church crosses in a public speech in April, saying, “It isn’t appropriate to see a night sky full of church crosses.”

After instantly receiving a flood of complaints from Christian groups after he made the remarks, however, the ministry released a statement the next day that said, “Even if the bill on light pollution is passed, we have no plans to regulate religious installations including crosses.”

Although there is no official data available, many of the estimated 50,000 Protestant churches nationwide display LED or neon crosses on their steeples or rooftops. The churches have the lights turned on for varying hours every day, and, in many cases, the period stretches from after dark until dawn.

Aaron Tan, a globally recognized architect from Hong Kong, said in an interview with a Korean newspaper earlier this year that what is most impressive about Korea is the glaring church crosses against the backdrop of urban night scenery. He was quoted as saying at the time, “I can see so many churches and I can notice an increased number of them each time I come back to Korea.”

The color of most illuminated crosses is either red or white, but red makes up the majority. You Mi-ho, a spokeswoman with the Korea Christian Environmental Movement Solidarity for Integrity of Creation, or KCEMS, says red symbolizes the blood of Jesus.

Experts on religion say the decades-old convention of churches illuminating the sacred symbol in an outdoor area is unique to Korean Protestantism, the country’s second-most popular religion. The 2005 census, conducted by Statistics Korea, shows that Protestants totaled 8.62 million, or 18.3 percent of the population, while Buddhists accounted for 22.8 percent, and Catholics, 10.9 percent.

“The first question I got from a group of French pilgrims who visited Seoul a few years ago was why they saw so many shiny red crosses at night here,” said a Catholic priest in Seoul who asked not to be named. “Being a priest myself, I couldn’t really explain the phenomenon.”

Amid the rising controversy over the crosses, an association of some 8,000 Presbyterian churches in Korea late last month launched an “environmentally friendly cross movement.” But their focus is more on the light source. The movement encourages churches to replace neon crosses with those made of LED lights. LED lights are known to consume one-tenth of the electricity it takes to light a neon sign. The churches are also considering adopting solar, wind and even bicycle-generated power to light up the outdoor crosses in the near future, says You of the KCEMS, which is affiliated with Presbyterian churches.

Park Sun-ung, a minister at a Methodist church in Hongcheon, Gangwon, says he’s had an experience that could help Protestant churches resolve the cross light issue.

Five years ago, a family of magpies destroyed the wire connected to the cross on top of his church’s spire. Realizing they probably did so because they nest under the spire and the light was too bright, Park turned the light off. Soon more magpies flocked to the spire to build more nests.

“I don’t necessarily think churches should stick to illuminated crosses. Crosses made of soil or wood could be more eco-friendly and comforting,” he said in a recent interview with Yonhap News Agency. “What would Jesus have done about it? We should really think about whether he would have wanted us to light [the crosses].”