Serena struggles in return; worries about nails after win

Serena struggles in return; worries about nails after win 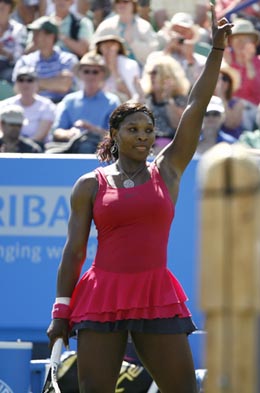 Serena Williams celebrates after beating Tsvetana Pironkova in the first round at Eastbourne, Tuesday. [XINHUA/YONHAP]

EASTBOURNE, England - Making her return to competitive tennis after a life-threatening illness, Serena Williams was only really worried about one thing on Tuesday - her nails.

The 13-time Grand Slam champion recovered from a terrible start to win her first match after nearly a year out, beating Tsvetana Pironkova 1-6, 6-3, 6-4 in the first round.

She said she “felt a little something’’ in the foot she injured shortly after winning Wimbledon last year, but when she fell in the last game, that was no longer her concern.

“It’s definitely not cool on my nails if I fall,’’ she said. “I can potentially break one and that makes me really upset. I have three weeks to get through without breaking a nail.’’

Williams started out looking nothing like the player who lifted the Wimbledon trophy in her last tournament. Her movement was uncertain, and she appeared not to trust her groundstrokes or her usually dominant serve.

She held for the first time at 5-0 down and only slowly began to look like her old self.

“How difficult was the first set? It wasn’t too difficult, it wasn’t long,’’ Williams said. “It was over really fast and I thought, well hopefully I can get some momentum. I think I was just a little anxious and missing a tremendous amount of shots.’’

Williams reeled off the first three games of the second set to take control, and despite squandering a 2-0 lead in the decider, she broke again to secure the win.

Williams hasn’t played since July last year after cutting her foot, which eventually led to blood clots in her lungs.

By the time she came to serve out the match after two hours on court, the 29-year-old American was breathing heavily and was given a warning by the umpire for taking too much time between points.

But despite the struggle, Williams said she had enjoyed her return.

“I definitely think I had fun,’’ she said. “After everything I’ve been through, it’s all fun to me now. It’s all a bonus.’’

Next is a repeat of the 2010 Wimbledon final against top-seeded Vera Zvonareva, a 6-3, 6-3 winner over British wild card Heather Watson.

“She’s a great player and I have nothing to lose,’’ Williams said. “I’m going to go in there and do what I can do. Whatever happens, happens.’’

But she looked unsure of herself even in the warm-up and it spilled over into the match. Her sister Venus, who returned after five months out on Monday, began her match with two double-faults, and Serena opened her first service game with one of her own.

Pironkova, who reached the semifinals at Wimbledon last year but had won only four matches this year, showed no sympathy to her opponent’s predicament, and her fierce groundstrokes made Williams look pedestrian at times.

After falling behind 4-0, Williams smacked her racket into the turf in disgust. On winning her first game to make it 5-1, the former top-ranked player heard the rare sound of sympathetic applause.

The unseeded Bulgarian then took the set with a forehand winner. Williams, though, had begun to look - and sound - more like her old self. She greeted her winners with some determined cries of “come on’’ as the confidence gradually returned.

After letting a 2-0 lead slip in the third set, Williams immediately broke again and, after the time violation and a fall, eventually completed the win.

Also Tuesday, Ana Ivanovic went through to a second-round meeting with Venus Williams with a 6-4, 6-3 victory over Julia Goerges of Germany.