What voters need is a human touch

What voters need is a human touch 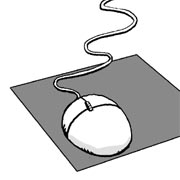 In the beginning, it was called an “X-Y position indicator for a display system.” That was the name in the patent for the now ubiquitous device invented by Douglas Engelbart in 1968.

The device consisted of a wooden box with two gear wheels and three buttons and a long cord hanging out the back. Engelbart not only invented the device, he also gave it the name by which we know it today - the mouse.

Like all revolutionary inventions, the mouse had a humble beginning. At first, it was mocked as a device that couldn’t even enter words into a computer. But the mouse became a commercial success when Apple introduced the Apple Lisa personal computer in 1983. Since then, the mouse has transformed the computer from a picky master into a user’s servant.

Unlike other inventors of computer equipment, Engelbart didn’t make a fortune from his patent. In fact, it earned him a mere $10,000. But in 1997, Engelbart finally received formal acknowledgement of his achievement when he was chosen as the recipient of the Lemelson-MIT Prize, the most prestigious honor for inventors.

“Click” used to describe a sound, but the word has also come to be used as a verb for the action of pressing the button on the mouse. Our acceptance of computer lingo into our everyday vocabulary has given “click” other meanings as well: “to succeed,” “to fit together” and “to become clear.” With the advent of the IT boom, the word has also been adopted by business and the entertainment industry. Hyundai Motor made a Click sedan in 2002. In the 2006 film “Click,” Adam Sandler gets into trouble by clicking a remote control that manipulates time.

Apple, which helped launch the “click” era, is now working to replace the “click” with a “touch.” With the invention of the touchpad, which has a tactile sensor to track the movement of the fingers, the computer mouse is becoming obsolete.

The latest Apple operating system is named Lion. Will its story be similar to that of “The Lion and the Mouse”? You never know. In the Aesop fable, the lion lets the mouse go and the mouse comes back to save the lion from the trap.

Although we may soon lose the computer mouse, there are still many “clicks” in politics. Politicians click “left” for welfare policy and “right” for North Korean policy. Of course, their goal is to win more votes. But no matter how hard they click, they should not forget that voters still need a human touch.