Next Playboy has ‘runaway bride’ sticker on cover

Next Playboy has ‘runaway bride’ sticker on cover 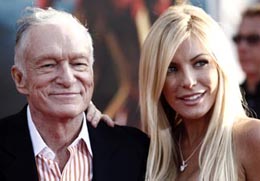 LOS ANGELES - Playboy founder Hugh Hefner, dumped by his fiancee days before their wedding, said Wednesday he is affixing “Runaway Bride” stickers over her picture on the cover of the magazine’s upcoming issue.

Hefner, 85, announced a day earlier that 25-year-old Crystal Harris had “a change of heart,” and that Saturday’s wedding ceremony for 300 people at the Playboy Mansion in Los Angeles had been canceled.

In the interest of journalistic accuracy, Hefner has moved quickly to remedy the situation.

“Recent events call for a special sticker on the July cover. Look for it on newsstands,” Hefner said on Twitter.

A big red sticker announcing “Runaway Bride In This Issue!” covers most of Harris’ bottom half.