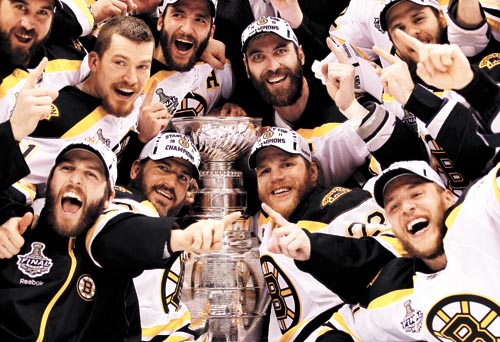 Boston Bruins players celebrate with the Stanley Cup after they defeated the Vancouver Canucks to win the NHL championship in Game 7 of the finals in Vancouver, Canada, Wednesday. [REUTERS/YONHAP]


VANCOUVER, Canada - The Boston Bruins won the Stanley Cup for the first time since 1972 on Wednesday, beating the Vancouver Canucks 4-0 in Game 7 of the finals.

Tim Thomas capped a spectacular playoff run with 37 saves at the Canucks’ hostile home arena, and Patrice Bergeron scored two goals as the Bruins earned the only away victory of the two-week series.

“I think I went even further than I thought,’’ Thomas said. “I never envisioned three Game 7s in one playoff series and still being able to come out on top.’’

Brad Marchand also scored two goals for the Bruins, who disappointed an estimated 100,000 Canadian fans who gathered in downtown Vancouver to celebrate the Canucks’ chance at their first championship.

Boston had lost five straight Stanley Cup finals since winning its last championship. The Bruins hadn’t even reached the finals since 1990.

Thomas limited the Canucks to eight goals in seven spectacular games in the finals, blanking Vancouver in two of the last four. Boston dropped the first two games in Vancouver but became just the third team since 1966 to overcome that deficit.

“All the physical work we’d done throughout the whole series added up,’’ Thomas said. “Being the last series, we didn’t save anything, and we used that physicality again and that was the difference.’’

Canadian Bergeron added a Stanley Cup ring to his gold medals from the Olympics and the world championships with his biggest game of a quiet series. He scored his first goal of the finals late in the first period on a shot Luongo saw too late, and Marchand added his 10th goal of the postseason in the second before Bergeron’s short-handed goal, which inexplicably slid under Luongo.

The Bruins are the first team in NHL history to win a Game 7 three times in the same postseason, and they drew another dose of inspiration from forward Nathan Horton, whose concussion in Game 3 irrevocably changed the series’ momentum.

Horton was lost for the series with a concussion on a big hit from Vancouver’s Aaron Rome. The Bruins rallied for four wins in five games after Horton’s injury.

During a two-week Stanley Cup finals that ranks among the NHL’s weirdest in recent years, the only predictable aspect had been the home teams’ dominance. Vancouver eked out three one-goal victories at home, while the Bruins won three blowouts in Boston.

The loss capped a spectacular collapse by Luongo, the enigmatic goalie who backstopped Canada to Olympic gold medals on this same ice sheet a year ago. Luongo was pulled from the Canucks’ last two games in Boston after giving up 15 goals on the road, and he was fatally shaky in Game 7.

Luongo praised his own positional game earlier in the series, but he didn’t recover in time to stop Marchand’s second-period goal. Five minutes later, he inexplicably failed to close his legs on a slowly sliding puck on Bergeron’s goal - the seventh allowed by Luongo on the last 21 shots he faced dating back to Game 4.

Luongo wasn’t alone in deserving Vancouver’s blame: the Sedin twins are the NHL’s last two scoring champions, but they capped a disastrous finals by being on the ice for all of Boston’s goals. Captain Henrik Sedin, last season’s MVP, scored just one goal in the series, while Daniel Sedin had two goals and two assists, scoring in just two of the seven games.

Boston overcame more than the Vancouver crowd and the NHL’s highest-scoring team to win this Cup. Starting in the first round, when the Bruins rallied past Montreal after losing the series’ first two games at home, this team has showed a resilience and tenacity that hasn’t been seen much in the self-professed Hub of Hockey in four decades.

The Bruins have failed in their five previous trips to the finals, since Bobby Orr led them to championships in 1970 and 1972. Remarkable players such as Cam Neely came and went without a Cup, while Ray Bourque had to go to Colorado to get his only ring 10 years ago.