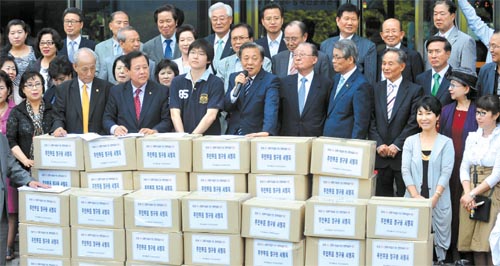 
A coalition of conservative civic groups formally demanded yesterday that Seoul city government hold a residents’ referendum over a plan to block a controversial project to provide free lunches to all elementary school kids in Seoul, activists and officials said.

The plan to provide free school lunches, initiated by the main opposition Democratic Party (DP), has become one of the hot political issues since last year, with opponents describing it as a “populist” campaign to win votes, while supporters say the ruling party should put its budget priority on welfare.

Since early this year, a coalition of 160 conservative civic groups, named the National Anti-Populism Union, has been working to ask the city to hold the residents’ referendum to block the free lunch project, claiming the project overlooked the financial burden on taxpayers in Seoul.

So far, about 800,000 residents in Seoul have signed up to hold the referendum vote, according to the coalition, though just 418,000 signatures are required to hold the residents’ referendum.

“With some 800,000 citizens signed up, it proved that Seoul citizens are cleverer than politicians who claim to support populism,” Kim Jeong-soo, secretary-general of the coalition, told reporters.

Kim called for citizens to actively vote for the residents’ referendum, widely expected to be held in late August.

By law, a local government is required to hold a residents’ referendum when 5 percent of all eligible voters support such a poll.

It will take about two months for the city government to confirm the eligibility of the signatures. If confirmed, a poll could be held in the fourth week of August, city officials said.

However, the prospects for a poll on free lunches are still uncertain because ballot counting will not occur unless one-third of the 8.36 million eligible voters in Seoul participate, observers said.

Mayor Oh welcomed the civic groups’ move, which comes as even the ruling GNP signals a shift toward populist policies, including calls for college tuition cuts, after dwindling popularity following defeats in April’s by-elections.

The residents’ referendum on free school lunches “could put an end to debate on whether we need more populist policies,” Oh said.

Kang Hee-yong, city councilor of the DP, accused the coalition of collecting the signatures through illicit methods.

“Irregularities were rampant in the signature campaign,” Kang told reporters, vowing to nullify the coalition’s petition by finding as many ineligible signatures as possible.