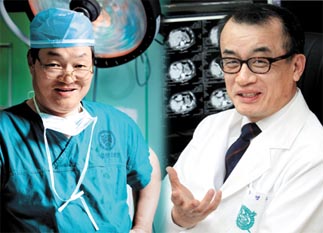 CHICAGO - Earlier this month, two Korean researchers drew acclaim from 2,000 cancer specialists in Chicago after they presented preliminary results of their clinical study on the treatment of gastric cancer.

“We found out that the survival rate of gastric cancer patients increases by about 23 percent when they’re injected with a certain anticancer drug Eloxatin, together with Xeloda, a chemotherapy pill,” said Bang Yung-jue, a professor in the Department of Internal Medicine at Seoul National University’s College of Medicine, in a presentation at the annual American Society of Clinical Oncology (ASCO) meeting in Chicago on June 6.

As soon as Bang ended his presentation, hundreds of cancer specialists scrambled to meet Bang in person. That day, Bang was honored with the “Best of ASCO” award.

Bang, along with Noh Sung-hoon, who is a professor in the Department of Surgery in Yonsei University’s College of Medicine, revealed the interim findings of their clinical tests on the effects of anticancer treatments after surgery at this year’s 47th ASCO meeting.

The two renowned cancer specialists, from the country that has the highest rate of gastric cancer in the world, joined forces and proposed the new global standard for gastric cancer treatment.

“The effects of anticancer drugs after gastric cancer surgery were always the subject of considerable debate until recently, as nothing was scientifically proven,” said Bang.

That was why Bang and Noh’s research astonished the world. The two professors called the project “Classic.” It divided 1,035 patients from Korea, Taiwan and China who had received surgery for stage 2 and 3 gastric cancer into two groups. The professors administered the two anticancer drugs - Eloxatin and Xeloda - together to one group, while not giving any anticancer drugs to the second group. They have been observing the patients for three years.

Preliminary results are sensational: the group that had received the two anticancer drugs had a 74 percent survival rate, which was 14 percentage points higher than the group with the placebo. “Using the two drugs together also reduced side effects,” Bang said.

It was Bang, an expert in anticancer treatment, who first asked Noh, an expert in gastric cancer surgery, to work together in 2004. A stumbling block had been the high costs of conducting clinical tests. They had to convince the pharmaceutical company Roche, which produces the anticancer pill Xeloda, to help them out financially. The company agreed to support the two professors with over 10 billion won ($9.18 million).

Classic began in June 2005 and the two professors said it will be completed by the end of 2012. Final results will be disclosed in the fall of 2013.