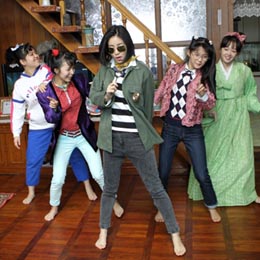 The Korean film “Sunny” has beat out its foreign and domestic competitors to become the first film of the year to hit the 5 million mark.

The film, released on May 4, had drawn 5.08 million moviegoers as of Saturday, CJ E&M, the movie’s distributor, said yesterday, quoting data from the Korea Film Council.

“Sunny” was third at the box office in the second week of June, topping Hollywood blockbusters such as “Pirates of the Caribbean: On Stranger Tides,” “Kung Fu Panda 2” and “X-Men: First Class.”

The film tells a humorous and touching story of seven high school friends who reunite and relive their teenage days in the 1980s.