Susan Boyle story to be turned into a musical

Susan Boyle story to be turned into a musical 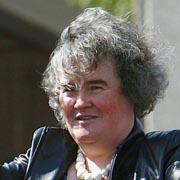 LONDON - Scottish singer Susan Boyle, who shot to stardom in 2009 when her performance on a television singing contest became an internet hit, will see her life portrayed on stage in a new musical.

“I Dreamed a Dream,” named after the title of the song she sang that made her an overnight celebrity, will tour internationally from 2012 after premiering at Theatre Royal in Newcastle, England, on March 23.

“I never thought my life story would end up on the stage but a lot has happened in two years and it is a very exciting prospect,” Boyle said.

“I hope everyone enjoys the show and I promise there will be a few surprises along the way,” she added in a statement.

Boyle will be played by actress Elaine Smith, best known for her role in the British comedy series “Rab C Nesbitt” and a favorite of the singer.

Boyle’s rendition of “I Dreamed a Dream” was viewed some 300 million times on the YouTube video sharing site, and within days she was a global singing sensation.

Under the tutelage of music producer Simon Cowell, who was a judge on “Britain’s Got Talent” when Boyle performed, she has gone on to record two albums and sell some 14 million copies.

Producer Michael Harrison said of the show: “It’s got all the qualities of a fairytale, but with the added bonus of being absolutely true.”