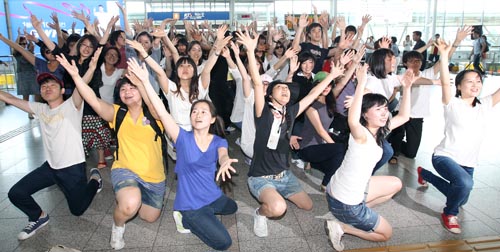 Members of various human rights groups dance as part of a flash mob demonstration choreographed to Michael Jackson’s “Black or White” at Seoul Station, yesterday. The event was held to raise awareness about World Refugee Day, which is today, and commemorate the 60th anniversary of the UN Convention Relating to the Status of Refugees. The flash mob is scheduled to appear at the National Assembly today at noon. [YONHAP]