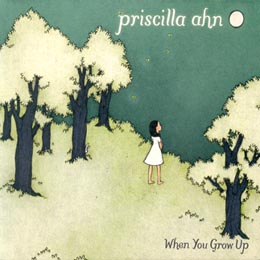 Priscilla Ahn returned with a new album on May 3, displaying the same easy and comfortable charm that made her first album so appealing.

But “When I Grow Up” also demonstrates that she has matured in both style and subject matter.

Ahn’s soothing vocals have the unique ability to calm people when times are tough and the title song is a classic take on her signature sound - it’s a folksy a capella tune that can be enjoyed by anyone.

Ahn has become a rising star in the folk scene, and she has also carved her way into popular culture, slowly and delicately revealing who she is through her music. Her songs have appeared in movies and dramas such as “My Sister’s Keeper” and “Grey’s Anatomy,” along with several TV commercials.

Her music is the kind you might hum along to in a quiet coffee shop, or choose to accompany a light conversation among friends. You could listen to it while reading a book, but it’s also the kind of music that fits easily into the hustle and bustle of the streets of Hongik University.

Priscilla Ahn “When I Grow Up”