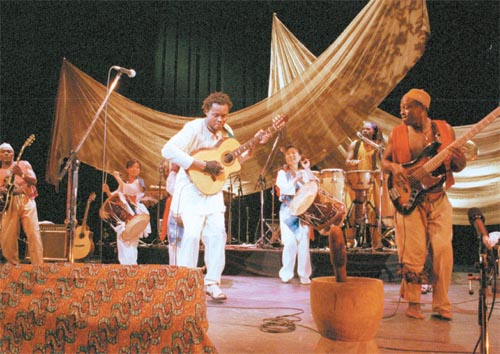 Eric Aliana & Korongo Jam, a France-based Cameroonian band, performs with a traditional Korean percussion group in a cultural event in Japan in 2006. The Cameroonian band is among five African groups invited to the African Cultural Festival in Seoul from June 30 to July 3. Provided by the Ministry of Foreign Affairs and Trade


The Ministry of Foreign Affairs and Trade is planning to host a festival dedicated to African culture at the end of the month as part of its cultural diplomacy toward Africa, an increasingly important continent for Korea.

The African Cultural Festival, featuring various genres of African arts, will begin at the National Museum of Korea’s Theater Yong in Seoul on June 30, the ministry said.

The festival is being organized by the Seoul section of the International Dance Council.

“Through this festival, we hope to create a friendly mood with African nations and enhance relations with them,” a ministry official said. “We expect to expand the horizon of our cultural diplomacy toward Africa.”

During the four-day festival, groups from 12 sub-Saharan African nations will come together to present music, dance, film and arts and crafts from their countries.

The featured countries are Ghana, Nigeria, South Africa, Burkina Faso, Senegal, Uganda, Ethiopia, Zimbabwe, Cameroon, the Democratic Republic of the Congo, Togo and Ivory Coast. The ministry said it selected the 12 nations based on their developing relationships with Korea.

Three Korean percussion bands will participate in some of these performances.

There will also be an exhibitions of African relics and paintings, landscapes and people by three Korean photographers and a film screening featuring 10 African movies from as many countries.

The program also includes a lecture by a Korean diplomat who has worked in Africa.

Choi Dong-hwan, former Korean ambassador to Senegal, will speak on Africa’s challenges and opportunities at the National Museum of Korea at 2 p.m. on July 2.

Visitors to festival will also be given the opportunity to make African crafts such as key holders, necklaces and headscarves.

“This is part of a series of cultural exchange projects initiated by the Ministry of Foreign Affairs and Trade in 2006,” the ministry said in a statement.

According to the ministry, the series has featured countries in Southeast Asia, the Middle East, Central Asia, Latin America and the Black Sea coast, all of which Koreans are relatively unfamiliar with.

The African festival is being held as President Lee Myung-bak stresses the importance of developing Korea’s relationship with the continent, which is rich in natural resources and recording fast economic development.

Africa is also where the International Olympic Committee will announce the host city of the 2018 Winter Olympics next month.

The IOC general meeting will be held in Durban, South Africa on July 6.

The Korean city of Pyeongchang is making its third-straight bid to host the Winter Olympics and is competing with Munich and Annecy, France.

Those hoping to attend the African Cultural Festival must make a reservation for the programs they hope to attend on the festival Web site, www.africanculturalfestival.co.kr.