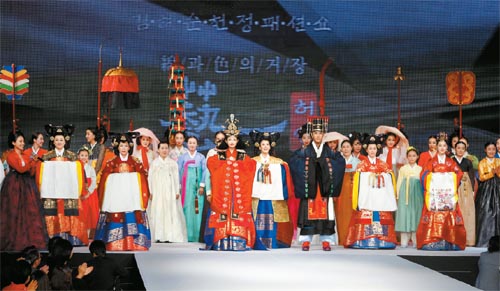 
About 100 pieces of hanbok, traditional Korean attire, boasting vivid colors were on display in front of 600 attendees at a special fashion show titled “Carrying on the Legacy of Beautiful Hanbok,” at the Grand Hyatt hotel in central Seoul, on Friday, where a series of movie stars and celebrities participated as models on the catwalk.

All of the dresses at the show were designed and made by Kim Hye-soon, a renowned hanbok designer who supplied her clothes for the television soap opera “Hwang Jini” and a Korean movie called “Chunhyangjeon.”

Choi In-sun, the chief director of the foundation, who is also the wife of a Ministry of Foreign Affairs and Trade official, said she recognized the need to promote hanbok.

“When I met with high-profile western designers in Washington and New York, they were really surprised to see my hanbok attire and flocked to me asking ‘how does this material make this fantastic shape of clothes?’” Choi.

“And that’s the time when I realized I had to promote hanbok abroad.

“We are planning on holding a larger hanbok fashion show at the Metropolitan Museum of Art in New York this October, especially focusing on traditional Korean royal families’ attire. And today’s fashion show will be the preview version of the upcoming show in October.”

Backed up by salpuri, a traditional Korean shamanist dance, actress Chai Si-ra showed off a celestial dress with her two arms open, boasting the lines and the fabrics of her colorful attire.

A string of celebrities introduced new designs and variations of restyled hanbok as part of widespread public campaigns to revitalize the traditional dress.

Some former Miss Korea winners also showed up in clothes made of eco-friendly fabric, such as hanji, or traditional Korean paper, and natural dyes.

Eyes were mostly on the finale, the parade of the king and queen, when Chai and male models appeared in vibrant colors of royal costumes.

Choi, who is also a member of the Seoul International Women’s Association (SIWA), which is a group comprised of female expatriates, such as businesswomen or spouses of ambassadors, says she is now devising a plan to host an event related to hanbok for SIWA sometime next year.