Sometimes, the name says it all

Sometimes, the name says it all 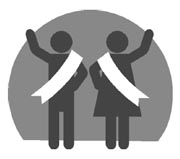 The name you give something can have a drastic effect on how it is viewed, especially in politics. One example is a recent proposal on school lunches in the Seoul education system that sparked controversy. It could be called either a “free lunch” program or an initiative for “school meals at no cost.” The choice of words completely changes the connotation.

The idea of a free lunch as bait first appeared in the late 19th century in New Orleans. Saloons there would serve a free meal with the purchase of at least one drink. Although it was not the finest fare, the food was worth more than the price of a single drink. The saloons believed that customers who came into the establishment for free food would buy more than one drink, but thought that even if that didn’t work the customer would become a regular patron.

What began as a business tactic soon became an unexpected social phenomenon, and some people began visiting restaurants only to take advantage of the free meals. The miners who went to California looking for gold but lost all their money equated the free lunches at saloons with meals offered by charity organizations.

Some saloon keepers were nice enough to give them the meals without purchasing a drink, but it had negative effects. Saloons soon started requiring customers to buy more than one drink to get the free lunch, which encouraged drinking. In 1896, the state of New York passed a law banning free lunches and the phrase “free lunch” came to have a negative connotation. The saying “there ain’t no such thing as a free lunch” means that an offer may seem free but you will have to pay for it some other way.

In contrast, the phrase “school meals at no cost” certainly has a positive connotation. The United Kingdom was the first state to provide school meals at no cost. In 1944, the British government started providing meals at school and offered free meals to impoverished children. In 1980, under the Thatcher government, the school meal system was abolished, and contractors started selling meals at schools. As a result, the quality of meals grew worse. Research shows that British children now have more fat and sugar in their bodies than those in the 1950s.

The political debate over school lunches in Seoul grew overly heated, but soon there will be a referendum on the issue. The outcome will depend on whether citizens regard the plan as a “free lunch” driven by populism or a “school meal at no cost” based on health and welfare.