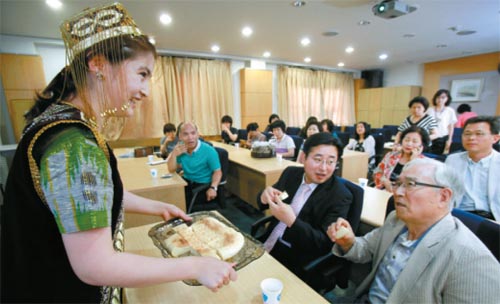 Muhayyo Jumaboyeva, a marriage immigrant from Uzbekistan, gives a piece of Uzbekistani bread to people who came to take her class at Ilsan 3-dong Office in Goyang, Gyeonggi, on Thursday. By Lee Chan-weon


When Muhayyo Jumaboyeva, a 22-year-old woman from Uzbekistan, walked into a classroom at Ilsan 3-dong Office one sunny afternoon last week, the office staff and neighborhood association representatives assembled there didn’t suspect that she speaks Korean fluently.

But then she introduced herself and her homeland in fluent Korean.

“I fell in love with Korean television shows back in Uzbekistan, and I had a fantasy about Korea,” Jumaboyeva said in Korean.

“I eventually married a Korean man. Now I’ve lived here for three years and eight months and I live happily with my son and parents-in-law. I didn’t speak Korean when I first arrived, but I picked up the language quickly after bothering my teachers at the Goyang Multicultural Family Support Center to give me a spelling test every day even if there wasn’t a language class. I even practiced my Korean by speaking to random people at bus stops.”

The audience listened attentively as she continued: “People usually give me a surprised look when I speak in Korean because I look different. But some people have complimented me by saying I speak Korean well even though I’m a foreigner.”

But they burst into laughter when she said: “Other people have confessed that they thought I was Korean and am a successful example of plastic surgery, which I’ve never had. And I took it as a compliment!”

The class on multiethnicity was organized by the Goyang city government in Gyeonggi, and it is one of a number of similar classes and programs arranged by local governments to help multiethnic families adapt to Korean society. These centers also reach out to Koreans to educate them about the new members of their community.

The Goyang city government began offering classes for employees and representatives of 39 neighborhoods in Goyang in March.

“I had the prejudice that most multicultural families struggle financially and live unhappily, but after listening to Jumaboyeva, I learned that some marriage immigrants have cheerful souls and are willing to live happily. I have the hope that multicultural families won’t be a problem for Korea’s future if both Koreans and immigrants work together to understand their differences.”

Currently, 20 marriage immigrants give introductory lectures about their homeland and culture on a regular basis in 39 neighborhoods in the city of Goyang.

Kim Hee-jin, the official at the center who proposed the classes to the city, said all 20 marriage immigrants underwent a 24-hour intensive training session in which they learned how to create lesson plans and teaching methodologies and then gave a mock class to classmates and educational experts.

The Gumi Multicultural Family Support Center in North Gyeongsang has organized a bilingual speaking contest with the support of the North Gyeongsang Provincial Government since 2009. The annual contest invites children from multiethnic families to speak in Korean and their mother’s language on a topic decided by organizers.

“Normally, fathers play down the importance of having children speak in the mother’s language at home because, while many of them tend to look up to English and French speakers, they tend to look down on speakers of Southeast Asian languages,” said Jang Heun-seong, head of the Gumi Multicultural Family Support Center. “Children who participate in the contest gain confidence about being bilingual. They realize that being different isn’t a fault but a source of pride and joy.

“We’re debating about having a competition for fathers this year because it could give the men an incentive to learn about their wives’ countries. Shouldn’t they at least be able to speak words of greeting in their wives’ native languages when they meet their mothers-in-law?”

To help the children of multiethnic families sharpen their bilingual skills, the center will take the contestants who are of Korean and Vietnamese descent to Hanoi University in Vietnam in December for a two-week language course.

All expenses, including the flight and language classes, will be paid by the North Gyeongsang Provincial Government.

Currently the center is in discussions with the University of the Philippines to arrange a similar program for children who are of Filipino and Korean descent.

With the belief that marriage immigrants, 89 percent of whom are women, will be better able to raise their children and support their family if they have a college degree, the local government signed MOUs with 38 universities in the region to provide scholarships to marriage immigrants who want to go to college.

Under the program, half of the tuition is covered by the college, and the local government provides a scholarship of 1 million won ($923) to each marriage immigrant with a successful application. A total of 29 marriage immigrants have benefited from the program so far.

Do Thi Bich Dung, a 29-year-old Vietnamese marriage immigrant from Gumi, is one of those who have benefited from the program. She leads a hectic life working as a Vietnamese-Korean translator for the Gumi center by day and taking classes at Gumi College in the evenings.

“I decided to earn a college degree because I wanted to be a good mother to my five-year-old son, Si-hyeon,” she said. “Many moms in multicultural families agonize over this, because a person can’t help with her child’s education if she doesn’t speak Korean well - and many moms in multicultural families don’t because they didn’t go to school here. These women are deeply concerned that their children will lag behind in school.

“And I don’t want to find out later that my son is disappointed with my academic level. I’m studying social welfare because I want to become an expert who helps multicultural families in the future.”

Experts on multiethnic families in Korea point out that many of the husbands of marriage immigrants work low-paying jobs as factory workers, taxi drivers, deliverymen and a day laborers, which means the families are likely in need of additional support to make ends meet.

The experts said that encouraging marriage immigrants to earn college degrees could help them find a regular source of income, while also helping them educate their children. This is important, the experts said, because a college degree is required for anyone seeking a white-collar job.

Kim Hee-jin, the official from the Goyang Multicultural Family Support Center, also said the government needs to provide more permanent full-time positions at multiethnic family centers nationwide. “Most workers at [multiethnic family] centers across the country are in temporary positions and have to have their contracts renewed every two to three years,” Kim said. “They also tend to leave these jobs because the work is very demanding and without much reward.”

Kim also said the center needs more funding to keep its staff and continue its work.

“Our center receives an annual budget of 20 million won. We are barely able to buy office supplies. If experts on multicultural family affairs continue to quit their jobs, it will be hard to nurture experts who are involved in this field.”