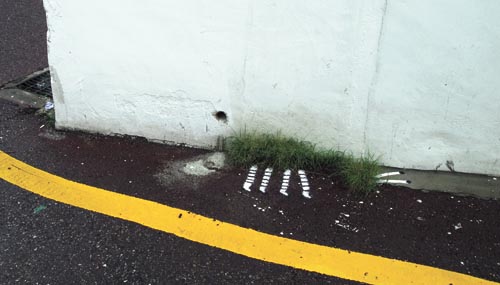 Inspired by weeds growing out of cracks in the asphalt, artist Nanan started potting the plants and placing them on the street. She then expanded the project, called “Nanan’s Gardening,” to include street paintings like the one above. Provided by The Diary of Itaewon Residents


Itaewon was once synonymous with dark alleys, crime and shoddy souvenirs. But the neighborhood has transformed itself in recent years with hip cafes, trendy bars and posh restaurants with cuisine from around the world, and it now draws people from all walks of life.

Young Korean artists are no exception.

Attracted by the international atmosphere and the spirit of freedom it provided, artists began settling down in Itaewon out of curiosity and their friends and friends’ friends soon followed.

For one group of nine artists who migrated to the area, Itaewon has come to represent community and artistic exploration. A few years ago, their artistic instincts prompted them to create fun art projects for the neighborhood that has become their home. In March, they published a book documenting their projects called “The Diary of Itaewon Residents.” The stylish, all-color book is now available at bookstores nationwide.

“We wanted to do something in the name of Itaewon,” said Kim Yun-hee, a photographer and co-organizer of the book who is widely known by her nickname Cider. “Some artists like Nanan, who had been working on a garden project, were already doing their own projects, but the rest of us wanted to contribute, too.” 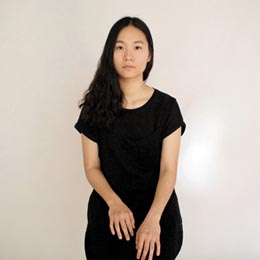 Cider, photographer and co-organizer of “The Diary of Itaewon Residents,” turned her home into a studio before it was demolished in a redevelopment project in Itaewon.

Cider has lived in Itaewon for six years. After she settled down there, her close friends Nanan and Jung Shin, the book’s other co-organizer, moved to the area as well.

“We simply wanted to capture the pleasant moments of our life in Itaewon,” she said. “For most Koreans, the most important thing they consider [when choosing where to live] is how expensive a neighborhood is, but what we want to do [with the book] is spotlight community culture - which is kind of fading away - by sharing stories of different people living in Itaewon.”

Of the nine projects documented in the book, the most striking is Nanan’s Gardening project. Nanan, who gained fame with her window paintings, said she loves her daily routine of waking up early every morning to go jogging on Mount Namsan. On her way up the mountain, Nanan, whose real name is Gang Min-jung, began to notice weeds growing out of cracks in the asphalt. She decided to plant them in pots of varying sizes and shapes to bring a bit of art to the streets.

Her garden project has since expanded to include street paintings that can be found all over the neighborhood. In one, pairs of striped stockings stick out of a clump of grassy weeds, like a skirt with many legs.

“My inspiration always comes from love. If you look at things with love, it helps you develop a relationship with the things around you,” Nanan said. 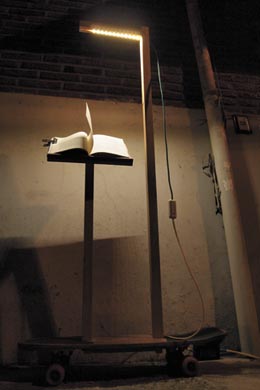 Park Gil-jong makes chic furniture out of found objects he collects on the streets.

So far, she has painted 24 pots in the neighborhood, but says her project isn’t finished yet.

“I always aim high,” the bubbly artist said with a grin. “I plan to keep doing this project not only in Itaewon but in other countries as well. And someday I’ll make a map of the Itaewon project so people who visit the area can see it.”

Like Nanan, Park Gil-jong, who has been living in Itaewon for about two years, also turns humble objects into enchanting works of art. Park makes furniture from trash he collects around the neighborhood. He said his patrol begins when it starts getting dark outside.

“When it’s dark, people throw away unnecessary goods,” said Park, who majored in fine arts in college and now runs a carpenter’s shop in Itaewon.

Strolling through the alleys of Itaewon, he collects whatever he can find, from an abandoned skateboard to a legless chair. After days of grueling work, he is able to turn an ugly wall clock into a funky table and a skateboard into a sleek floor lamp. Most of his products sell instantly.

When asked how he chooses objects to collect, he said that shape and texture are the most important criteria.

“But I can also tell just by looking,” he said. 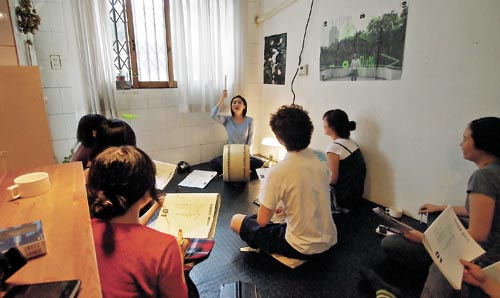 
Cider’s artwork also appears in the book. When she realized her house would be demolished because of a neighborhood redevelopment project, she turned her home into a studio, invited her friends over and took pictures of the people she wanted to remember. These portraits are her contribution to the book.

The book also tells the stories of long-time area residents and includes an oral history project by Lee Hae-rin.

“In the beginning, I was thinking about interviewing designers and artists in Itaewon,” said Lee, who was selling some of her things in April at a flea market organized by the nine artists. They organized the flea market as a way to connect with other area residents.

“But for some reason, the interviews with them were not that interesting,” she said. “So I started to look for ordinary residents. It took me about a month and a half to meet with them all and hear their stories.”

Through Lee’s interviews, some of the stories that made the neighborhood what it is today are revealed.

Customers who go to Yong Super are almost always treated to live music while they shop. Most don’t know, however, that the artist behind the music is actually the grocery store owner. Lee said that the owner was in a band in Itaewon in the 1970s, but had to quit to find better paying work. He eventually opened the grocery store, but told Lee that he still dreams of becoming a guitarist someday.

Lee also uncovered the story behind the now-famous May Bell Bakery. The owner, Jung Woong, had opened a bakery in Ilsan, Gyeonggi, in the early 2000s, but struggled to keep it afloat. His bread, mostly leavened varieties, had failed to appeal to Koreans, who prefer sweet breads. That’s when a friend advised him to move to Itaewon, and he hasn’t had to struggle since. All of the bread in the shop usually sells out by 3 p.m.


Another contributor to the book, makeup artist Hong Min-cheol, reveals some of the area’s secret hot spots through the project “On-the-spot Inspection of Love.”

Hong says that Itaewon is where he and his girlfriend met and fell in love. By reproducing a couple of memorable dates they had together there, the stylish artist takes readers on a unique journey through the area.

“I first thought about doing something with makeup but decided to do a project related to my girlfriend instead,” said Hong. “She’s the important person in my life now.”

Some of the projects described in the book are long-term business ventures.

Jang Jin-woo, a photographer and restaurant owner, got his start by opening a personalized catering service in which he would design a menu, go to the customer’s house and cook and serve the meal. He discontinued the service to open a small restaurant of his own a few months ago.

Kwak Ho-bin is one of a few young tailors in the area. The area was crowded with a large number of tailors through the 90s but most of them went out of business with the mass production of ready-made suits. Kwak, who started out making suits for his friends, now has his own tailor shop.

Hwang Ae-ri, a pansori (narrative singing) musician, offers pansori classes for area residents. Her photos of the classes and her students represent her contribution to the book.

Mok Jung-ryang, a sound artist, developed a Web page called One Pixel Gardening that uses less energy than other Web pages, and he encourages other artists to convert to eco-friendly Web pages.

None of the nine artists seemed sure about where they would be living 10 years from now, but they all said that they wanted to keep doing things to help the neighborhood.

“We had two goals when we organized this book. The first was that we all wanted to contribute to our neighborhood in our own ways. The second goal was to inspire and set a good example for other young artists,” Cider said.

“We hope we’ll be able to interact with more area residents and develop our projects to get more people involved.”

To learn more about these artists and their projects, visit http://2tw.1px.kr/.