Wimbledon on its way

Wimbledon on its way 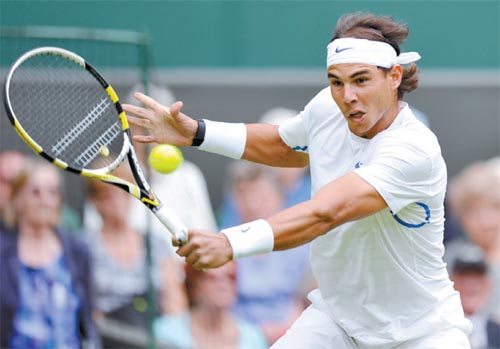 Rafael Nadal returns to Michael Russel of the United States during the 2011 Wimbledon Tennis Championships at the All England Tennis Club, in London, on Monday. [AFP/YONHAP]


LONDON - Rafael Nadal opened his Wimbledon title defense with a convincing victory Monday, beating Michael Russell 6-4, 6-2, 6-2 on a “fantastic’’ day while his parents watched from the Royal Box.

In keeping with tradition, the defending men’s champion played the first match on Centre Court at the All England Club - and the top-ranked Spaniard put on a worthy performance to begin the 125th edition of the championships.

Five-time women’s champion Venus Williams, back on her favorite grass surface, also swept into the second round with a 6-3, 6-1 win over 97th-ranked Akgul Amanmuradova of Uzbekistan.

On a day when rain washed out 31 matches on the outside courts, fourth-seeded Andy Murray also moved into the second round, winning in four sets against Daniel Gimeno-Traver in a match played entirely under the retractable roof over Centre Court.

Nadal, coming off his sixth French Open title and 10th overall Grand Slam championship, double-faulted to go down a break 4-2 in the first set against the 91st-ranked Russell. But Nadal buckled down, ran off six straight games to take the set and go up a break in the second. He was in command the rest of the way against the 33-year-old American.

“I started so-so in the first set, but after that I start to hit very well the forehand and I think I finished playing a very good level,’’ Nadal said.

The two players shared a laugh after Russell successfully challenged what had been ruled an ace by Nadal on match point. Nadal won the next point, though, to finish the match in just under two hours. It was the first time Nadal has walked onto Centre Court as defending champion. After winning the title for the first time in 2008, he missed the tournament the following year with a knee injury.

“Fantastic,’’ he said. “Seriously, I never played in a court like this. [It] was a big emotion to be the first player to play in this fabulous court. It was a very, very exciting feeling.’’

While Nadal and Williams played in mostly sunny conditions, rain fell in the late afternoon and forced organizers to call off all play for the day except on Centre Court, where matches continued under the sliding roof.

Resuming play in covered conditions at 1-1 in the third set after a delay of about 50 minutes, sixth-seeded Francesca Schiavone completed a 6-4, 1-6, 6-3 victory over 45th-ranked Jelena Dokic of Australia.

Bidding to become the first Briton to win the men’s title in 75 years, Murray got off to a slow start against the 59th-ranked Spaniard before taking complete command. From 3-3 in the third set, Murray won the final 15 games of the match.

Murray conceded only nine points in the third set and six in the fourth. The Spaniard took an injury time-out at 5-0 down in the third and received treatment on his right knee.

Williams, who played at Eastbourne last week after an injury layoff of nearly five months, looked right at home on the Wimbledon grass where she has been so dominant. She kept her opponent waiting for several minutes on Court 2, with Amanmuradova sitting patiently on her courtside chair for the 31-year-old American to arrive.

Once play started, Williams took Amanmuradova apart in 59 minutes with her hard-hitting all-court game. She served seven aces, broke four times and had 23 winners to only five unforced errors - none in the second set.

“It’s always great to be back,’’ Williams said. “To play a few matches at Eastbourne helped me feel pretty comfortable here. All in all, I’m pretty pleased. I only see pluses for today. I missed being out here playing.’’