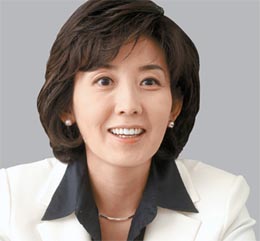 The Special Olympics will be held in Pyeongchang, Gangwon, in 2013 with some 3,300 athletes from 105 countries participating in the games. More than 15,000 people are expected to come to Korea for the event, including journalists, volunteers and spectators. The athletes will compete in seven winter sports including alpine skiing, snowboarding and figure skating.

The Special Olympics are of particularly strong interest for the congresswoman as she has an 18-year-old daughter who was born with Down syndrome.


Q. Is there a reason that you took the helm of the organizing committee?

A. I came across the Special Olympics in 2004. I thought about hosting the event in Korea and three years ago I started making great efforts towards it. In addition to hosting the event, I’ll commit myself to the end to see we have successful conclusion.

Among the handicapped, the mentally challenged seem to be the most estranged. Other disabled people can protest for their rights but the mentally disabled cannot because they have a lower mental capacity.

What kinds of challenges are you facing with the preparations?

Of course, money. Since it is a nonprofit sports event what’s most important is raising funds. A government budget is assigned but we still need private contributions. We also need donations from large companies but I hope that individuals take an interest in the Olympics and make small contributions too. Of the 43 billion won ($39.7 million) budget, the target for private contributions is 27.1 billion won.

Have you attended the Special Olympics before?

I watched the Special Olympics World Winter Games in Idaho in 2009. During the opening ceremony athletes and volunteers all wore hand-woven blue scarves. They were woven and sent by volunteers from around the United States. There were more than 10,000 of them. An old lady in Miami wove 23 scarves by herself. I was moved a lot. I hope I can gather as much public support for the Pyeongchang Games.

What is the significance of hosting the event?

The perception towards the handicapped has improved but is there still room for more improvement?

In the past, people were afraid of even talking about the disabled. It is a little better now but people still give a pitiful look. Now we need more than sympathy. We should be able to treat them as equal and acknowledge them as members of our society.

In other countries, the disabled are just regarded as “special” or “different.” We also need to change our perception of the disabled in a way that their human rights are guaranteed.

In the United States, people are instructed not to stare at the disabled. If more handicapped people become active in our society, and their existence is accepted more naturally, we’ll be able to learn how to live in harmony with them.

You have mentioned in the past that the reason you entered politics is because of your daughter. Which policy or law are you most proud of?

Hosting the Special Olympics and a bill for early discovery and treatment of disabilities. I also helped amend a special law to provide educational support for the disabled. Legislation is important but I think I have made small changes here and there.

Now I feel comfortable about speaking publicly about my disabled child. I feel speaking publicly about the topic of disabilities encourages mothers who are in the same situation. I also raised the quota of special education teachers for three years in a row recently. I feel that people are obligated to listen to me because of my message.

Your daughter is a senior in high school. How do you want her to grow up?

The disabled can have more difficulties when they graduate from high school. It is something that we should look into. My daughter wants to become a drummer. She also wants to go to college. She is like other high school seniors. She is very aggressive and even runs for class president every semester. One time she lost by just six votes. Now she is attending a regular school. She said she would run for the presidency of her class early this year so I suggested that she make promises to do difficult things on behalf of the class.

Is there anything you want to talk about with parents of disabled children?

I would like to give them courage. It is devastating at first. They worry about how much their children can achieve. There will be some difficult times. No matter how you try, sometimes you feel that it is not working. Have courage. They need to share their burden rather than keep it to themselves. Surprisingly, there are many possibilities.

You have been in politics for just nine years but you are already considered a leader in the party. What is your secret?

I don’t think I have political instincts. I feel that I move along with recent trends. I work very hard.