After the heat wave, prepare for a deluge

After the heat wave, prepare for a deluge 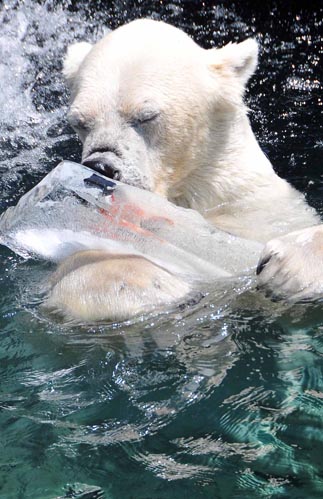 A polar bear at a zoo in Daejeon cools itself off yesterday as the temperature there hovered above 30 degrees centigrade (86 degrees Fahrenheit). Temperatures have risen fast in Korea this month, with Seoul and cities around it experiencing sweltering heat over the past few days. The National Emergency Management Agency on Monday announced measures to prevent people from getting heat stroke. One such measure is what the agency calls “heat breaks,” which are from 2 p.m. to 5 p.m. for people who work outdoors, especially in construction. But relief is expected today. The weather agency forecast yesterday that the country’s rainy season is expected to begin today in central Korea, nine days earlier than last year. That will cool the country off, but the rain is expected to continue through June 25 for the central parts of the Korean Peninsula, and some will be heavy. [NEWSIS]