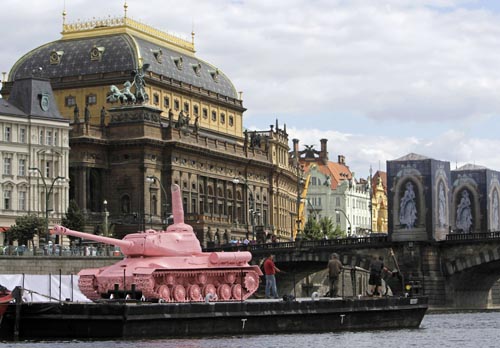 A Soviet WWII tank painted pink is carried on a boat in front of the National Theatre in Prague on Monday. Originally on display in Prague from the war until 1991, the tank, for many, was a symbol of the 1968 Soviet-led invasion that crushed the liberal reforms and ended the Prague Spring. When the Velvet Revolution led by Vaclav Havel toppled the communist regime in 1989, the country’s new officials demanded the troops’ withdrawal. David Cerny, a Czech visual artist painted the tank pink with friends in April 1991. The Soviet troops left by the end of June that year. The Czech Republic is commemorating the 20th anniversary of the departure of Soviet troops, and the tank was brought back to Prague from a museum for a week for the occasion. [REUTERS/YONHAP]