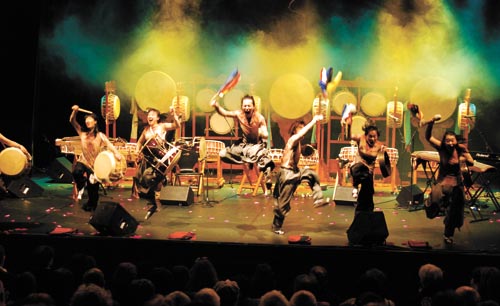 Members of the Korean music troupe Dulsori perform in “Well Wishing Binari,” which runs tomorrow through Sunday at Theater Yong at the National Museum of Korea in Ichon-dong, central Seoul. Tomorrow, Lee Charm, president of the Korea Tourism Organization, plans to join the performers on stage for about 10 minutes. See TRADITIONAL PERFORMANCE, below. Provided by Dulsori

Paik graduated from the Julliard School and is a laureate of the Naumbrg and Busoni International Piano Competition. He is the artistic director of the Emerald Coast Music Festival in Dinard, France, and the first Korean artist to be officially invited to perform in China.

Sunday: German pianist Martin Stadtfeld gave his first concert at age 9 and was only 13 when he enrolled in the Frankfurt University of Music and Performing Arts under the tutelage of Russian-American Professor Lev Natochenny. In 2002, he became the first German pianist to win the prestigious International Bach Competition in Leipzig, which led him to perform at leading Bach festivals in Germany.

Since then he has toured extensively as a solo artist and played with some renowned orchestras worldwide.

Winston began playing piano after hearing recordings of the stride pianist Thomas “Fats” Waller and others. Winston’s music is often described as “folk piano,” a style he developed in 1971 to complement uptempo stride piano.

He is also known for his recordings of the music of jazz pianist Vince Guaraldi, who composed the music for 16 “Peanuts” films and his recent explorations of R&B piano.

He has also produced recordings of Hawaiian slack-key guitarists like Keola Beamer and Ozzie Kotani.

Friday to July 10: Quebec-based contemporary circus troupe Cirque Eloize is coming to Korea. Founded in 1993 by Jeannot Painchaud, Daniel Cyr and Julie Hamelin, the group has presented shows in more than 375 cities and 30 countries.

In Korea, they will present “Rain,” which takes place during a rehearsal for a circus show. Incorporating elements of theater, dance and music with traditional circus acts, the show blurs the lines between reality and illusion.

To June 29: “The Idiot” is a musical drama based on Dostoevsky’s “The Idiot” that has been remade with pansori (narrative singing) and modern music. The plot tells the story of ordinary people who society calls “idiots.” The point of the drama is to show the beauty of pure and innocent love and the relationships between people that we are lacking in society today. We learn that sometimes, it’s okay to be an idiot.

The production is in Korean with English subtitles. No admission for people under 12.

Friday to July 9: Probationary Theatre presents “Some Girls” by Neil LaBute in its new venue, the first performance space dedicated to English-language productions in Seoul.

Based on Korean music, dance and performance traditions, Dulsori (“heartbeat of the land”) aims to rekindle the spirit of ancient Korean festivals through interactive performances that create a sense of community.

Since it began in 1984, the company has stolen the hearts of audiences in over 50 countries worldwide. A special exhibition in the Theater Yong lobby will show images from the company’s travels.

Saturday: With this performance, Kim Gyeong-ho makes his debut as a pansori (narrative singing) singer in “Song of Red Cliff.”

The show is a pansori version of the events surrounding the Battle of Red Cliff in the Chinese novel “Romance of the Three Kingdoms.”

To June 30: This music festival is a melting pot of traditional music, jazz, pop, rock, folk, opera and dance.

With different performances from Monday to Friday, there will be plenty to see.

Today to July 3: The Ditto Festival was started to make classical music accessible to the public. Its other goal is to promote 15 rising classical stars such as violinist Richard Yong-jae O’Neil, pianist Ji-yong, and pianist Hahn Bin.

July 2 and 3:This outdoor festival features special guests such as KT Tunstall on the first day and Brian McKnight on the second day, along with a slew of Korean indie bands.

Food is available from restaurants like Di Matteo’s Italian pizza and Hwajaiwen. People with two-day passes can rent camping packages with tents for two to three people (30,000 won) or for four to six people (60,000 won).

The festival is open all day.

To Aug. 31: The Dream Forest Arts Center presents its second festival, which is organized into four parts that follow the themes of family, rest, romance and art. The first part, “Forest of Secrets,” features 17 creative pieces. The second part, “Animal Outing,” features eight pieces about animals. The third part is called “Visionary Experiment” and features 10 pieces influenced by psychoanalyst Sigmund Freud. The last part is “Venice Glass Fantasia” and features 60 pieces of glass art by artists Schiavon and Pino Signoretto.