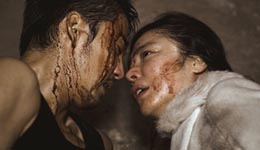 Part love story, part postwar tragedy, with a dose of comedy thrown in, the low-budget film “Poongsan” depicts the sad reality of the division between the two Koreas.

Poongsan (Yoon Kye-sang) has the unenviable - and death-defying - job of delivering messages across the North and South Korean border to separated families.

When South Korean government agents ask him to smuggle in In-oak (Kim Kyu-ree), the lover of a high-ranking North Korean defector, into the South, the damsel and rescuer fall in love instead.

Written and co-produced by Kim Ki-duk, who just won the Prize Un Certain Regard for “Arirang” at last month’s Cannes Film Festival, and directed by his protege Jeon Jae-hong, “Poongsan” came to life on just one-tenth of the average budget for Korean films.

Poongsan, whose real name is never revealed, is a mysterious man who delivers whatever brings him money by going back and forth between Pyongyang and Seoul. One day, the delivery man is ordered to bring In-oak. She joins the deliveryman on the life threatening journey.

In the middle of this trip, In-oak and the man start to fall in love, but their romance is put in jeopardy by the obstacles they encounter.


Green Days: Dinosaur and I (All)

The film was drawn in pencil, without the high-tech computer graphics and three-dimensional techniques that dominate the animation industry. This gives the film a timeless, more realistic quality.

Korean critics have said that although “Green Days” does not have any villains or dramatic climax, the good-hearted characters and tranquil setting are both touching and entertaining.

Na-mi (Shim Eun-kyung, Yoo Ho-jung), who is living a comfortable life with her husband and teen daughter, decides to reunite with a group of friends from high school after discovering that one friend has just two months to live.

Directed by Kang Hyung-chul, the film was well received by movie critics and is expected to attract women of all ages. Excellent performances by the young actresses make this film even more appealing.

Jeon Seung-chul defected from North to South Korea to find a better life. Although he does all types of menial jobs such as taping up posters on the street, he is armed with a can-do spirit. But he often finds himself being beaten or bullied by his neighbors because of his status as a North Korean defector.

Things become more complex when he falls in love with a South Koran woman at his church who works at a noraebang (Korean singing room). To win her heart, Jeon even lands a job at the same place.

Meanwhile, Jeon has to contend with his roommate, fellow defector Kyung-chul, who often steals and cheats on his compatriots.

Inspired by director Park Jung-bum’s friend Jeon Seung-chul, a North Korean defector who died of stomach cancer at the age of 30, rookie director Park wrote the screenplay and also played the lead role. The film has received more than five international film awards. 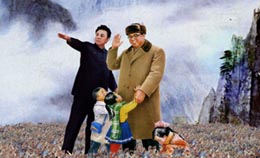 Kimjongilia is the name North Korea gave to a hybrid begonia developed in honor of the “Dear Leader,” Kim Jong-il.

But this film is not flowery fun.

The documentary, directed by N.C. Heikin, takes lengthy interviews with several North Koreans who defected and paints a brutal picture of life in the regime that has starved, imprisoned and caused so much anguish for so many of its people.

Heikin interviews North Koreans from a variety of backgrounds - a prison escapee, a woman whose entire family gets locked up and a singer-turned-sex-slave, to name a few - and throws in some propaganda films and other extras for good measure.

There is specific focus on interpretive dance, though reviews are mostly mixed on the effectiveness of these scenes.

“Kimjongilia” was originally screened at Sundance in 2009 and is now one of many recent films dealing with the issue of the North Korean regime, defectors and human rights.

Australia gets invaded by a hybrid-Asian army that apparently speaks a curious mix of Korean and Chinese. Why they invade, and why they invade Australia, is not entirely clear from the trailer or the synopsis but it’s likely it will all be revealed as the teens return from a camping trip and start packing heat to deal with the invaders.

Cheesy lines and explosions abound as the teens turn into soldiers, bent on repelling the invading army.

Based on the first in a series of novels for young adults by John Marsden, the film’s cast is pretty much unknown, with Caitlin Stasey perhaps being the most famous, in Australia at least, for her role in Aussie super-soap “Neighbours.”

Fans of run-of-the-mill action movies with pretty young people getting tough with Asian invaders will be pleased to know that they have announced a sequel and with seven books in the series we could get one of these every year until 2016. 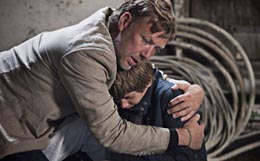 This ambitious drama captures the most compelling of human emotions in two starkly different environments: the picturesque Danish town where Anton, a Swedish doctor, lives with his son Elias, and an African refugee camp where victims of genocide seek medical help.

The film was originally released in Denmark in 2010 under the title “Hæven”-Danish for “Justice and Revenge.” Bier attempts to demonstrate the power of raw emotion, connecting the experiences and desires of people in seemingly incomparable circumstances.

With this film, Bier has directed one of the best releases of the year.