Clooney breaks up with girlfriend Canalis

Clooney breaks up with girlfriend Canalis 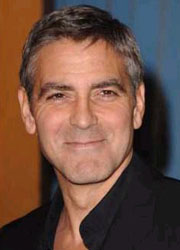 “We are not together anymore. It’s very difficult and very personal, and we hope everyone can respect our privacy,” they said in a joint statement cited by People magazine.

A spokesman for 32-year-old Canalis added: “It is a very personal and sad matter, and Elisabetta wants it to remain that way. She will be taking some time .?.?. and then will face the press. She has not authorized me to say when the split happened.”

The celebrity couple were first seen in public at the Venice Film Festival in 2009, and had been spotted together in Italy as recently as last week, People reported.

The 50-year-old actor, voted Sexiest Man Alive by People magazine in 1997, was married to actress Talia Balsam from 1989-93, but has played down the chances of getting hitched again. “I gave it a shot,” Clooney told CNN’s Piers Morgan in January.