Multiplexes under fire for cinema monopoly

Multiplexes under fire for cinema monopoly 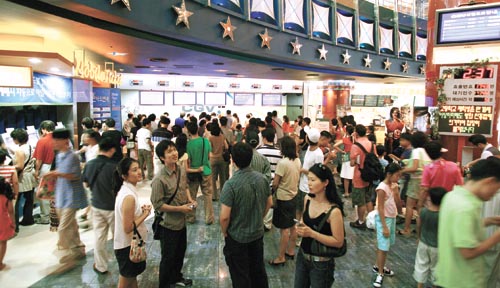 The nation’s major multiplex chains have come under fire for using their clout to exclude independent films. [JoongAng Ilbo]


The nation’s multiplex chains have come under fire for using their clout to exclude independent films from their theaters. But complaints from industry insiders and one of the nation’s major film associations could soon force the multiplexes to change their ways.

The newest industry insider to join the fight is director Kim Jae-hwan, who became an instant star after his documentary “The True Taste Show” was released earlier this month.

The film, which reveals the truth behind how famous restaurants in Korea are created by brokers, broadcasting stations and restaurant owners, continues to dominate the discussion on Web portals and in chat rooms.

The number of theaters screening the film has nearly doubled from 10 to 21 since its release last month, but Kim says that viewership has not increased because the number of times the film is screened is a fraction of what multiplexes grant to mainstream movies.

The nation’s major multiplex chains, including CGV, Lotte Cinema and Megabox, all have their own film distribution companies.

Films that are not distributed by the chains, such as “The True Taste Show,” have a hard time securing theaters for screenings.

For example, the Hollywood blockbuster “Kung Fu Panda 2” is screening at two theaters in seven time slots at CGV Gangbyeon, while “The True Taste Show” is screened just once a day at the same multiplex.

“Most theaters screen the film once or twice a day, so even if there are people who want to see it, the limited number of screenings makes it difficult to catch,” the usually media-shy Kim said in a recent interview.

“Kung Fu Panda 2” opened in 745 theaters on May 26 and has topped the box office for four weeks in a row as of Monday. It is distributed by CJ E&M Pictures, which is an affiliate of CGV,

The Korean film “Sunny,” also distributed by CJ E&M Pictures, was still ranked as the second most watched film for seven weeks in a row as of Monday. The film was released in 391 theaters when it premiered on May 4.

Kim is not the only one affected by the influence of multiplexes, most of which are run by conglomerates. One movie industry official said she recently had a hard time preparing a pre-screening event for the media.

“It was hard to book a theater for the prescreening event. I later realized that the best screening times are taken by movies distributed by the multiplexes, and theaters often stay empty even if there aren’t any films scheduled, indicating that the multiplexes are reserving the time slots for their films,” said the official, who asked to remain anonymous. “And the thing is, a film’s success hinges on the number of theaters in which it is screened.”

Another obstacle the smaller production and distribution companies face is the questionable practices multiplexes employ to fill theaters.

According to the Korean Film Producers Association, multiplexes regularly issue vouchers for free tickets without consulting the distributor.

When a movie ticket is sold, 50 percent of the ticket price, excluding relevant taxes, goes to the distributor while the rest goes to the multiplex. An estimated 3.1 billion won ($2.8 million) in free coupons was issued from 2004 to 2010, representing a reciprocal loss of profits for the respective distribution companies.

The Fair Trade Commission ordered the multiplex chains to stop issuing the vouchers in 2008, but the practice has continued.

In February, 23 film production companies belonging to the KFPA filed a civil suit against the nation’s four major multiplex chains to recoup the 3.1 billion won loss.

“The civil suit is still ongoing, but if we win the case it will be incredibly significant,” said Choi Hyun-yong, the KFPA secretary general. “We’ve filed complaints about their abuse of power in the past, but things haven’t gotten any better.”

In response to the flood of complaints about the multiplex chains from the KFPA and others inside the movie industry, the FTC launched an investigation last month into the matter to find out whether the major multiplex chains have used their power to shut out small and midsized companies, including distribution and production companies.

Multiplex chains have been advised to correct some of their practices by the FTC on more than one occasion. In 2008, the FTC ordered multiplexes to lift their ban on food and beverages purchased outside a multiplex, ruling it an unfair practice.

Before the ruling, the multiplexes allowed only popcorn, hotdogs and beverages purchased from multiplex concession stands to be consumed in their theaters. 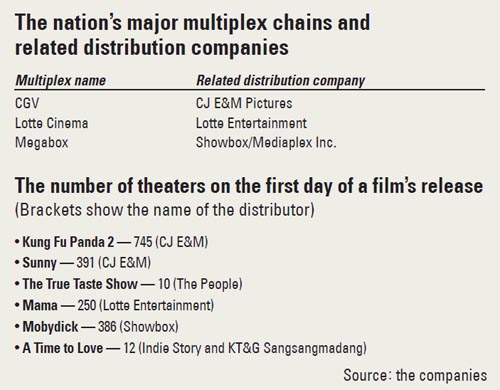