GNP has plan to cut college fees 30% in 3 years

GNP has plan to cut college fees 30% in 3 years 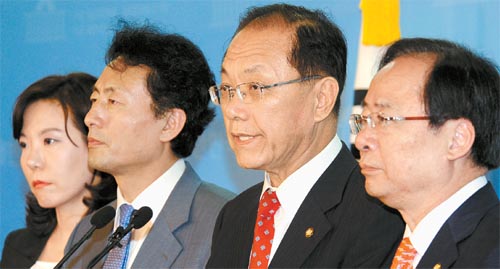 Representative Hwang Woo-yea, floor leader of the GNP, held a press conference yesterday and said the party wants to spend 6.8 trillion won ($6.31 billion) in public funds and have universities spend 1.5 trillion won over the next three years, which he said will lead to cheaper education and better universities.

While the party initially said the plan to inject a massive amount of state money into the university system was agreed to at a late night meeting of its floor leader and chief policy maker and the finance and education ministers, it later backtracked and said the government had only agreed to the larger framework of the roadmap, not the specifics.

And the Blue House was totally blindsided by the party’s announcement.

“I am very happy to announce this measure and to find the true breakthrough in resolving this serious issue,” Hwang said. “One month is a short period of time, but we rushed and worked hard to come up with this plan.”

On May 23, Hwang said that sweeping measures to lower the country’s college tuition would be the GNP’s top priority to restore its popularity ahead of general and presidential elections next year.

Since then, both ruling and opposition political parties have clamored to one-up each other in promises of tuition relief.

In the GNP’s program, the first step will be taken next year when the government spends 1.5 trillion won to lower tuition by an average of 15 percent.

Representative Lim Hae-kyu, who heads the GNP’s tuition-cut task force, said another 2.3 trillion won and 3 trillion won of state money will be spent in 2013 and 2014, respectively, to lower tuition by 30 percent from the current amount.

Conspicuously missing from the GNP’s announcement, however, was how to raise the funds needed. Minister of Strategy and Finance Bahk Jae-wan strongly disapproves of the measures, and the ruling party and the government failed to come up with an agreement during late night discussions Wednesday.

“We will discuss the roadmap with the opposition parties and the government during the National Assembly’s deliberation for next year’s budget to develop it further,” Hwang said.

“Today’s announcement may not be satisfactory to the people, but I would like to ask the public to understand that it is the best effort warranted within the limit of state finance,” Hwang said, possibly referring to demands from some that tuition be cut by 50 percent. Politicians, including Hwang, initially used the term “half-price tuition” in their pledges to help students, and they have struggled with protesters who now demand that promise to be realized.

The Blue House was baffled by the ruling party’s decision to announce the measure on the eve of the president’s meeting next week with the leader of the largest opposition party. President Lee Myung-bak will meet with Democratic Party Chairman Sohn Hak-kyu on Monday to discuss pending state issues, including tuition cuts.

“No final decision has been made,” said Kim Du-woo, senior public affairs secretary to the president. “This is a complex political equation. We have to consider the ruling party’s position as well as the opposition chairman’s position. It’s not an easy situation.”

He said the finance and education ministries also disagree with the plan, and it will take time for the government to come up with a final plan.

Another Blue House official said the timing of yesterday’s announcement was undesirable considering the Blue House’s desire for a successful meeting next week with Sohn.

The Ministry of Strategy and Finance also made clear yesterday that the GNP’s announcement is not a finalized plan.

“The specific figures can only be decided when we agree with the measures,” said Bang Moon-kyu, Finance Ministry spokesman. “The GNP appeared to announce a plan currently under discussion.”

The Democratic Party also criticized the timing of the GNP’s announcement.

“That lacks etiquette to the DP and the president,” said Representative Jang Se-hwan, a senior policy maker, at the DP’s leadership meeting. “We will find out if the GNP’s action is meant to influence the summit between Lee and Sohn or not once the meeting takes place.”

In a related but separate development, the National Assembly’s committee on education Wednesday approved a bill to revise the law governing private universities to stop schools from stockpiling tuition money in reserve. If the bill is approved at the main voting session next Wednesday, it will take effect starting next year.

Instead of lowering tuitions, schools were criticized for transferring leftover revenue to their reserve funds.