Practice what you preach, please

Practice what you preach, please 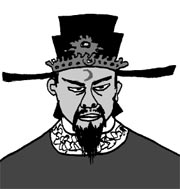 Bao Zheng, or “Bao the Blue Sky,” of the Northern Song Dynasty in ancient China was the consummate example of an honest and upright official. His poem is written on the wall of a government building in Guangdong Province, and it begins, “Integrity is the basis of administration.”

There are over 100 local play productions about the life of Bao Zheng, and his name on his tombstone has worn off as visitors touch it to pay their respects.

If Bao Zheng valued integrity over family ties, Jeong Yak-yong compared it to chastity. “Integrity of government officials is like the chastity of a woman and even the slightest stain will leave a mark forever. A dark room does not grant secrecy as four know.”

The “four” refers to what Yang Zhen of the Eastern Han Dynasty called “Si Zhi.” It means “the Heaven knows, the Earth knows, I know and you know,” so you should always be honest and incorruptible.

Jeong Yak-yong considered integrity the innate duty of a public servant, the source of all good and the basis of all virtues. Therefore, he declared that a man who lacks integrity and honesty could not serve in government. Only honest officials could pursue transparent administration, keep authority of the government and be incorruptible. In his book “Mokminsimseo,” he mentions “integrity” countless times.

Yulgok Yi I emphasized integrity as the most important virtue of a public servant in his book “Geokmongyogyeol.” He teaches, “If you take a government position, you are working for others, not for yourself.” The purpose of the government official should be to realize the political ideal to improve the lives of the people, not to enjoy personal prosperity and wealth.

A few days ago, employees of the Ministry of Public Administration and Security signed an integrity contract and submitted it to the minister. Ironically, the ministry represents the other side of the civil servant community - tainted by corruption and bribery. Hopefully, they will make efforts to practice the ethics as much as they cry out their slogans.