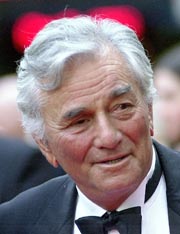 “Peter Falk, 83-year-old Academy Award nominee and star of television series, Columbo, died peacefully at his Beverly Hills home in the evening of June 23, 2011,” said a statement issued by the attorney.

Like many actors of his generation, Falk began his career on the stage, honing his craft in school, community theater and off Broadway. By the late 1950s he began to star in Broadway productions, and soon made his move to Hollywood.

Falk’s breakout film role came with “Murder, Inc.” in the supporting part of a killer among a gang of thugs, but it was his performance on the opposite side of the law - as police lieutenant Columbo - that earned Falk superstardom.

The show became a smash hit after its debut in 1971. It continued playing on TV for many years and even spawned several TV movies later in the actor’s life.

Falk is survived by his wife, Shera, of 34 years and two daughters from a previous marriage.