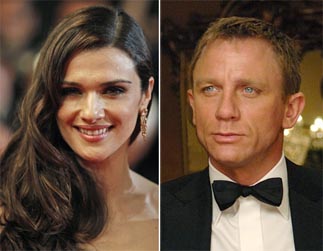 LOS ANGELES - Daniel Craig and Rachel Weisz, who play husband and wife in an upcoming film, have taken the roles to heart.

Robin Baum of Slate PR, which represents Craig, said Saturday that the actor and Weisz have married. She did not offer any details.

The British actors had been quietly dating. The wedding previously was reported by the British newspaper News of the World.

Craig is the latest James Bond and will star in “The Girl with the Dragon Tattoo.” Weisz won an Academy Award for “The Constant Gardener” and starred in “The Mummy.”

The pair costar as a married couple in the unreleased film “Dream House.”

The 43-year-old Craig had a longtime girlfriend, Satsuki Mitchell, and has a daughter from a previous relationship. The 41-year-old Weisz was in a relationship with director Darren Aronofsky (“Black Swan”), with whom she has a son.