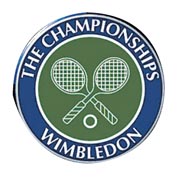 LONDON - The mercury was rising at Wimbledon on Saturday as the serial trophy hunters gathered in the last 16 with defending champions Rafael Nadal and Serena Williams leading the charge and Roger Federer and Novak Djokovic not far behind.

Australian qualifier Bernard Tomic added a new face to the second week when he produced the biggest shock of the men’s tournament by beating Swedish fifth seed Robin Soderling in straight sets.

Williams, seeded seventh after her return from 11 months of serious health problems, made her most emphatic statement yet by blasting Russia’s Maria Kirilenko 6-3, 6-2.

“I was a little more consistent and I played my game more,” the 13-time grand slam champion said.

“Wasn’t as tight and nervous and uptight. I was able to relax more today.”

Maria Sharapova, the 2004 winner, took her customary place at the business end of a major as the fifth seed overpowered Czech Klara Zakopalova 6-2, 6-3 on No. 2 Court.

The scheduling of the top women’s players on what is the club’s third court has been a bone of contention this week after Serena Williams, five-time winner Venus Williams and world No. 1 Caroline Wozniacki have all made their way through the walkways to the sunken bowl.

She then made way for the club’s most decorated member to strut his stuff in the sunshine.

Swiss maestro Federer, his eyes fixed on Pete Sampras’ record of seven Wimbledon men’s titles, produced another superb outing to dismantle David Nalbandian 6-4, 6-2, 6-4 despite making a complete hash of a smash on his first match point.

The most absorbing action was saved to last, however, as Djokovic and smiling Cypriot Marcos Baghdatis produced a prime-time sizzler that had Centre Court fans roaring their approval.

Djokovic won 6-4, 4-6, 6-3, 6-4 in a match full of sensational rallies and one of the best racket demolitions seen on the famous arena as the Serb second seed vented his frustration in the second set.

“I was hanging in there and fighting,” Djokovic, who next faces Frenchman Michael Llodra in his bid for a first Wimbledon title, told reporters.

“Playing here the last five years there were not many moments when I saw practically all the stadium on their feet. It was incredible.”

After a stop-start tournament so far, the 125th championships are now simmering nicely with all the ingredients in place for a tasty second week.

“Monday will be kind of cool when all the men play at the same time,” said 29-year-old third seed Federer, who faces Russian Mikhail Youzhny.

Nadal returned to No. 1 Court a set up after rain stopped play on Friday and after more dogged resistance from wildcard Muller, the last man to beat him at Wimbledon other than Federer, Nadal roared through.

“Seems like the best players are all playing well,” the 25-year-old told reporters. “I don’t know if I’m going to win my next round. Probably the rest of the players think the same.

Nadal, who committed just three unforced errors against Muller and is yet to drop a set, had reason for caution as his last 16 opponent is 2009 U.S. champion Juan Martin del Potro who beat Frenchman Gilles Simon.

“I’m not lucky to play against Del Potro in the round of 16,” Nadal added. “But that’s what it is, and I have to be playing my best tennis to try to win.”