Women honored by IOC for contributions

Women honored by IOC for contributions 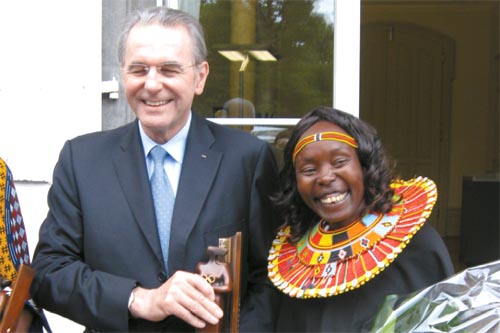 
LAUSANNE, Switzerland - The International Olympic Committee held over the weekend its annual Olympic Day ceremony, which serves the dual purpose of celebrating the founding of the IOC and giving out the Women and Sport Awards, which honor women from all continents who have “made an outstanding effort to enhance the participation, development and involvement of women and young girls in the sporting arena,” a statement on the IOC’s Web site said.

Award winners, IOC President Jacques Rogge and members of the IOC Women and Sport Commission gathered here in Lausanne at the committee’s headquarters for the celebration.

Rogge, who has pushed for gender equality during his term as IOC president, said the awards “represent how far the Olympic movement has come in the field of gender equality.”

“The participation of women at the Games has almost doubled in the last 30 years from 23 percent at the 1984 Los Angeles Games to nearly 43 percent at the 2008 Beijing Games. We expect this positive trend to continue at London 2012,” Rogge said.

With so many more female participants, and many of them doing work for those less-fortunate, the IOC acknowledges these women with the Women and Sport Awards.

This year’s IOC World Trophy - the top honor - went to Tegla Loroupe from Kenya. Loroupe is a long-distance track runner and global spokeswoman for human rights. Her Peace Foundation works to bring peace to Africa through sports.

“I’ve always believed that heart, passion and sports can bring peace to conflicted regions, and this award gives me enormously great support,” said Loroupe, a two-time world record holder in the marathon.

The IOC Trophy for Africa went to Nadouvi Lawson Body from Togo, while the Trophy for the Americas went to the Women and Sport Commission of the Ecuadorian Olympic Committee.

The final prize, the Trophy for Oceania, went to Daphne Pirie from Australia.

Anita DeFrantz, an IOC member from the United States and the chair of the IOC Women and Sport Commission, said she was happy to celebrate this year’s “elegant and wonderful winners whose contribution to gender equality is legendary.”