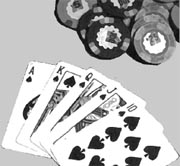 In the 1830s, under the Indian Removal Act, the United States forcibly relocated American Indians to “Indian reservations” and took over the fertile land as part of a larger policy of Indian removal. The term “Native American” is rejected by many Indians because government programs extend it to others (Eskimos, Aleuts, Native Hawaiians and Pacific Islanders) along with them. “American Indian” is preferred and most widely used for the native people of North America.

The story of the forced relocation is recounted in the folk song “Indian Reservation (The Lament of the Cherokee Reservation Indian),” which served as a warning about the policy of Indian removal in the United States. As the song goes, the traditional culture and spirit of the Indians disappeared in the poverty and discrimination that accompanied their forced relocation.

Around this time, an idea was proposed to revive the declining Indian reservations. The solution was gambling. In 1979, the Seminole tribe in Florida became the first to initiate a movement to operate gambling enterprises on reservations, and the Indian Gaming Regulatory Act was passed in 1988. The reservations were allowed to operate gambling establishments that were not under the jurisdiction of the state.

As a result, casinos opened on many reservations and Indians were given an opportunity to get out of poverty. There are now more than 300 casinos operated by American Indians across the U.S., and the total revenue of these casinos is more than the combined revenue of Las Vegas and Atlantic City. But eventually, various social problems arose, including a surge in crime.

The rhetoric of using casinos to boost the local economy was applied in Korea as well. When mines in the Sabuk region of Gangwon closed, the region lost its major source of income. To revive the flagging economy, the casino resort Gangwon Land was built. But no casinos have been allowed in the middle of a major city that is not a tourist destination. Gambling is illegal in Korea, but there are casinos for foreigners. Koreans cannot enter these casinos, with the exception of the one in Gangwon. Recently, Minister of Culture, Sports and Tourism Choung Byoung-gug made a controversial statement arguing for the reversal of the law. “It is morally problematic to think that foreigners can visit casinos but Koreans can’t because a casino is a gambling enterprise.” He’s right about that, but if he wants to argue that Koreans should be allowed to visit casinos, he needs to provide a more solid justification.