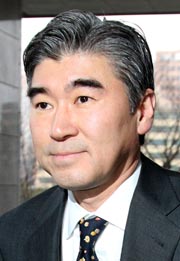 If his nomination is confirmed by the Senate, Kim, 51, will replace Kathleen Stephens and become the first person of Korean origin to serve as U.S. ambassador to Seoul. Kim immigrated to the U.S. in the 1970s and obtained U.S. citizenship in 1980.

Kim, who is fluent in Korean, is known as the State Department’s top Korea expert.

He has served as special envoy to the six-party talks on the North Korean nuclear program since July 2008, after heading the Office of Korean Affairs at the department for two years. He worked at the U.S. Embassy in Seoul as political-military unit chief from 2002-06.

Many Korea experts expect a positive impact from his role in Seoul.

“I believe he will effectively represent American interests in Seoul, all the more so because his personal experience will give him a more multidimensional and long-term view than many previous U.S. envoys have had regarding the potential and limits of the U.S.-ROK alliance,” said Scott Snyder, director of the Center for U.S.-Korea Policy.

Bruce Klingner, senior researcher at the Heritage Foundation, said Kim’s ethnicity will help the people of the allies come closer.

“Ambassador Kim may well be the most knowledgeable diplomat on all matters Korean given his long involvement with North and South Korean issues,” he said. “But perhaps the biggest positive impact comes from the local perception of ‘prodigal son returns home in triumph’ since Mr. Kim was born in Korea. His personal story and talents will cement the already strong bilateral relationship between the United States and Republic of Korea.”

Meanwhile, the U.S. plans to name Clifford Hart, foreign policy adviser to the chief of naval operations, as special envoy to the six-way talks, according to multiple sources.

Hart, also a veteran diplomat, is known for his expertise on Chinese and Russian affairs.