Aunties and young men face off in Japan

Aunties and young men face off in Japan 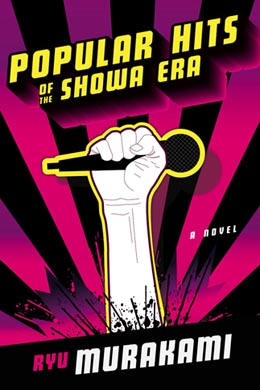 TOKYO - The high point of life for a group of aimless Japanese men in their 20s is singing pop songs, eating beef jerky and watching a female neighbor undress - until one, for no reason, kills a middle-aged woman.

The woman’s death galvanizes her group of friends - divorced, fiercely independent “obasans,” or aunties, in their late 30s - who plot revenge against the men, violence that escalates hilariously as the two groups pick each other off.

“Popular Hits of the Showa Era,” a satire, is one of a handful of books by prolific and prize-winning author Ryu Murakami to be translated into English. He has also written “Coin Locker Babies” and “Almost Transparent Blue.”

Murakami, who has played in rock bands and dabbled in filmmaking, talked to Reuters about his book and about writing.


Q. What inspired you to write this book?

A. It was the start of the 1990s. The whole idea of personal computers and communication via them was just getting started, though of course there wasn’t really an Internet yet, and there were lots of people just sitting around at computers. People were just thinking of themselves. It was a very peaceful society but there was a sense of something dangerous in it.

I wanted to write about how all you needed was one incident to invite a lot of violence, but I wanted to make it funny because otherwise nobody would read it.

What did you intend with this book?

All of these people were really just lazing their way through life, not doing much of anything. Then one young man killed one of the middle-aged ladies, and this really raises the tension between them. They’re doing a very bad thing, they’re killing each other, and yet this brings them very much alive.

What do you start from with a book?

There’s usually something that’s a “seed.” These seeds can be something that somebody has said, or a scene from a movie. I start from scenes a lot. There are newspaper articles too. This is the core, and then the buds of the story start to appear. Once I figure out the theme, then I can write it.

When I have a book that’s really structured, I might work from a lot of notes. But when it’s a book like this one, I just write away at it really hard and get the people moving.

Where do you get the seeds and what was the one for this?

They usually just appear, you can’t go out looking for them. I think this was a newspaper article. A young man had just up and stabbed an obasan in a suburb of Tokyo. That was a hint for me. I thought it might be interesting if the obasans made a group and decided to take revenge.

I also use things that have happened in society. For example, years ago in Japan, babies were being abandoned in coin lockers. It went on for quite a while. Mainly those babies died. But once when I read in the newspaper that once again, they’d found a baby in a locker, I thought: what if that baby survived, grew and took revenge on society, how would society stop them? Do they have a philosophy to stop them? As I thought about this, it become the core of “Coin Locker Babies.”

Do you always have ideas, even when you take time off?

Yes, a lot of them. My thinking is that if a lot more people understand what I write, I probably wouldn’t be able to write. I still sell pretty well compared to a lot of authors, but because it doesn’t seem that I’ve gained wide acceptance I have plenty of motivation to write. I still feel a bit like a minority, not part of the majority.

My way of thinking is really different from that of the mass media, bureaucrats and politicians - and because of this I think there’s meaning in writing. To say this is probably an exaggeration, but I think I’m like the child who could see - and say - that the emperor wasn’t wearing any clothes.

Do you listen to music when you write?

No. I have to concentrate. When I want to write, I write. I never have times when I can’t write, not once. I just write. So I really don’t understand those writers who suffer writer’s block. I think it’s because there’s just so much I want to say. I’m taking in so much, so much more than I actually put out. You don’t just think of something in a vacuum.

I don’t like to write the same kind of thing, otherwise I get bored and can’t write. So if there isn’t something fresh about it, I can’t get interested enough to write. I basically look at something a bit different each time and that helps me keep on writing, I think.

Do you have advice for aspiring writers?

Write. A person who hasn’t done anything isn’t a writer.


Popular Hits of the Showa Era