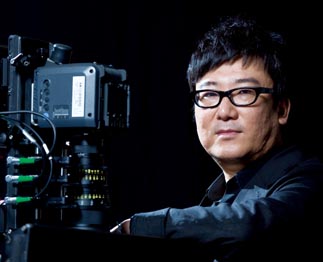 His face looked bright, but his shoulders heavy. Why? Because he has what could be the future of Korean film resting on his shoulders. The man in the spotlight is Yun Je-gyun.

Yun directed the hit film “Haeundae” which garnered more than 10 million viewers at the box office two years ago.

Now, the 42-year-old has stepped out of the director’s chair and is hoping to surpass his previous success with two new movies that he produced - “Sector 7,” the first Korean sci-fi film shot in 3-D, and the action movie “Quick.” Both are slated for release this summer.

Yun first got into the movie business in 1999 when his screenplay for “Black Honeymoon” took top honors at a local contest. At the time, the Korea University grad was working as a copy writer for LG Ad, now HS Ad, but his winning screenplay helped propel him into the film world.

Two years later, he made his directorial debut with the comedy “My Boss, My Hero” (2001), which had an audience of 3.5 million. The following year, he released his second movie, “Sex is Zero,” which drew around 4 million viewers.

Even with his early commercial success, however, fans and film critics were split on Yun. Some said the director was a “comedic genius,” while others criticized him for his consistently low-brow humor.

But things came to an abrupt halt when his third film “Romantic Assassins” (2003) fell flat, sending him into a slump.

It wasn’t long, however, before Yun had returned to filmmaking. His film “Miracle on 1st Street,” released in 2007, didn’t pull in the big numbers of his previous works, but it was still a step forward for him.

Then he hit the jackpot with “Haeundae,” in 2009. In “Haeundae,” Yun used high-level computer graphic technology, supported by Hollywood engineers. With the combination of interesting special effects and a touching story, “Haeundae” became the fourth-highest grossing film in Korean movie history.

Now, Yun is hoping his two new films will do even better. With “Sector 7” in particular, Yun expects the film to go beyond “Haeundae” and open the door for Korean 3-D films to challenge movies like “Avatar.”

Earlier this month, the JoongAng Ilbo sat down with Yun at the CJ Powercast studio in Ilsan, Gyeonggi, to find out what he thinks about the future of Korean film.

A. There are some movies that require a strong visual impact, and this was one of them. If 3-D technology can support that, the film needs to be made that way.

I don’t think 3-D is the answer to all problems, but I also don’t think it will be a short-lived trend by any means. When I went to Weta Studio in New Zealand, which worked on “Avatar,” they were already talking about 5-D. That was before Korea even had 4-D. I can’t imagine what our theaters will be like in 30 or 100 years. It’s just the beginning.

What’s your response to people who say 3-D isn’t necessary in Korean film?

It’s important to look at the big picture. I believe that after 10 years, just like automobiles, semi-conductors and cell phones, film will be what represents Korea. But the problem is technology. We need to invest in it and develop our use of it to produce films of the same caliber as Hollywood.

Why do you say that technology can make Korean films shine?

I met some people who work in Hollywood this year and they said positive things about Korean film. Most say the storytelling and production is close to Hollywood.

And we have an advantage when it comes to cost. When I say that I made “Haeundae” for $10 million, most Americans are surprised. Hollywood studios can’t just overlook us since we can produce quality films for less than one-tenth or five-tenths what some Hollywood studios are willing to spend.

Is a competitive production budget still the advantage of Korean film?

Whether it’s Samsung Electronics or Hyundai Motor, they all entered the global market with competitive prices. But their products are no longer cheap. You can deal with quality later.

Why do you think the audience for 3-D movies is decreasing?

I think it’s a matter of supply and demand. “Avatar” was really powerful when it came out. But after that there were a lot of copycats, so people weren’t satisfied with what they got. It’s similar to what happened to other smartphones after the iPhone came out. If there’s something better than “Avatar,” I think people will be excited again.

Do you think that will be “Sector 7”?

I hope so. I’m putting my life into this film and I have a lot of pressure on me.

What’s the secret to your success?

I once heard something from the Korean singer Psy and I really took it to heart. He said, “Know your place.” I thought again about why I felt like I had to follow great film directors like Lee Chang-dong, Hong Sang-soo and Lee Myung-se. My place is in making entertaining, commercial movies, so I decided to develop that. (Laughs.)

The other thing is based on the expression “show 200 when your opponent expects 100.” I think this is really important for creators. For instance, when I filmed “Haeundae,” most people thought it would be a copycat of the Hollywood film “The Day After Tomorrow,” but we touched people’s hearts with some plausible tsunami CG.

Any final thoughts before the premiere?

These days, I’m just praying everything works out. And I keep asking myself if I really tried my best. I believe that opportunity really comes to those who have the desire.