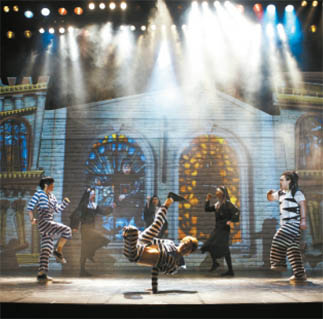 Performers dance in “VR Break Out,” which follows a group of prisoners who discover a book that makes them dance. Provided by Sevensense

Extreme dance comedy “VR Break Out” (VR meaning Virtual Reality) is a stereoscopic performance of various dance genres which uses high-tech stage effects such as 3-D mapping projections, holograms and motion recognition sensors to create a virtual interaction between the actors and the audience. The show will run until July 31 at the Kaya Theatre in Chungjeong-no, central Seoul.

The nonverbal performance, produced by the Korean company Yegam, premiered in 2007 in London’s West End. The show was also a sell out at the Edinburgh Fringe Festival the same year, winning the Cavalcade Best Walking Group award.

The play opens up in a prison and five prisoners dream of escaping from their monotonously repetitive lives. While assigned to fatigue duty, they discover a mysterious book that falls from the sky and realize that the book makes them dance when it is opened. Dreaming of their escape, they dig a hole to get out of prison. When they get caught, and are chased by prison guards, the prisoners use the magical book to run away.

After finally managing to shake the guards, the prisoners hide in a church and disguise themselves as nuns. While there, one of the three nuns of the cathedral accidentally opens the enchanted book, making her and everyone else dance to the exciting music. This alerts the main prison guard and the prisoners run away from him in an amazing 3-D effect.

The prisoners enjoy their freedom to the fullest after they reach an amusement park as they run away from the guard. In the park, three dancing angels in a musical box come to life when the prisoners open the enchanted book. There, the prisoners and angels become friends and engage in a bit of romance.

The prisoners’ magical journey and freedom comes to an end when they are caught and are surrounded by a group of police and prison guards. In the climax of the show, the five prisoners perform a dance expressing their struggle to escape from prison in order to reach their dreams and freedom.

The 80-minute show keeps the audience fully entertained as the prisoners and three actresses, who play the roles of the prison guards, nuns and the three angels, act out comical skits and do a dance incorporating various genres such as hip hop, break dancing and ballet. One of the most exciting parts of the show takes place when the main prison guard stages beatboxing performances whenever the magical book is opened.

“VR Break Out” attracted the attention of the Korean public after staging a long run on Broadway and appearing at various international theater festivals. The show will begin its first full-scale international tour in Vancouver, Canada, in August.