Star Korean artist shows off her ‘moves’ in England

Star Korean artist shows off her ‘moves’ in England 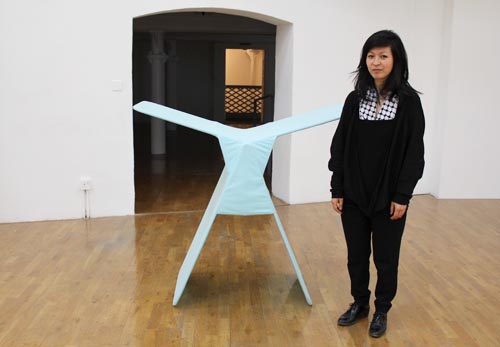 Yang poses with the very first work of her “Non-Indepliables” series, whose color was derived from that of door and window frames from the house she lived in Seoul in 2006 when the series was conceived. The piece in the current exhibition is a replica of the original one, which was newly made in 2009. By Park Sun-young


OXFORD, England - Her career may span more than a decade, and her materials and media may have changed, but when it comes to her message, Haegue Yang’s work has been consistent: the meaning of life, being and raison d’etre.

“One critic said that it’s not necessary that I know more about my work [than the viewers] or that I explain to help them understand it, and I think it’s pretty much true,” the Seoul- and Berlin-based artist said in a recent interview with the Korea JoongAng Daily at Modern Art Oxford, where a major solo exhibition of her work is currently being held.

Yang, who gained prominence in Korea for her solo exhibition at the 2009 Venice Biennale, is one of the few young Korean artists who enjoy international recognition.

But while she may have come into sudden prominence in Korea with her high-profile role at the international event, Yang rejects that narrative, saying that she does not consider the Venice Biennale as a watershed moment in her career as an artist.

Such achievement, she said, wasn’t the result of a lucky break but a step-by-step process of going through a number of exhibitions at museums and institutions.

“A more ‘serious dialogue’ between an artist and viewers, as well as respectable curatorial support, is more likely to be possible in an individual exhibition than in a big event like the Biennale,” Yang said. 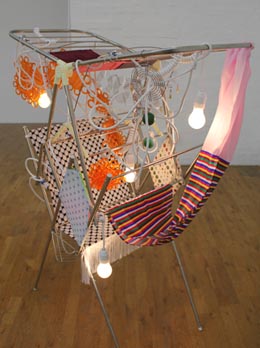 Without both local and international museums and exhibitions, she said, the art world would be “shallow.”

After moving to Germany in her late 20s, the Seoul-born conceptual artist has been more active in the European art scene.

“I think the art world in Europe is healthy and strong because of the great volume of quality exhibitions,” she added.

The following are excerpts from the interview with Yang.


Q. Tell us about your blind installation works, which are newly conceived and are featured in the current exhibition.

A. They are made of Venetian blinds like my earlier works, but different in that they are “repositioned,” so to speak. In my previous blind installations, I was interested in showing them in a “semitransparent” form, so I hung them at eye level so that viewers could look through them.

But the new pieces are positioned in a different way - up above. “Escaping Transparency” has literally “escaped” eye level in order to be looked at, not looked through, and “Dress Vehicles” are free to move around. They are all relevant to an interest in “movement,” which is guiding the present exhibition as indicated in its title, “Teacher of Dance.”

While preparing for this exhibition, I was concerned with the idea of “movement” itself, which can mean not only our physical activities, but also social and political movements. Revealing such diverse aspects of movement in various and different ways is my primary concern in this exhibition.

(“In its ordinary mutability, Yang’s work gives its viewers a fleeting vision of an utterly contemporary sense of self,” Anne Wagner, The Henry Moore Foundation Research Curator at Tate, remarked on Yang’s blind installations in an essay on the artist and her work.) 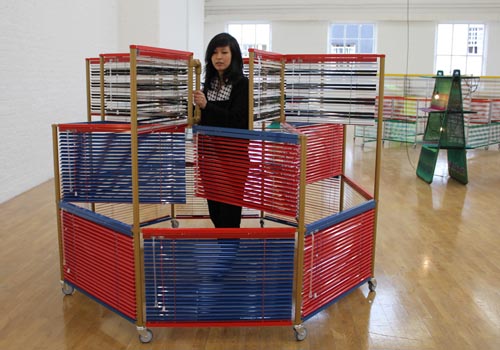 Yang demonstrates how “Dress Vehicle - Golden Clowning” (2011) can be moved around. Her new trilogy series “Dress Vehicles” is said to reference the stereometric costumes of Oskar Schlemmer’s “Triadisches Ballett” (1922). By Park Sun-young


The video piece “Doubles and Halves,” which was featured in the 2009 Venice Biennale, has also been included in the current exhibition. How is it relevant to the exhibition?

In this video work, I tried to show a dichotomous aspect of movement by revealing two separate, distinct places - Ahyeon-dong, where I used to live in Seoul, and the Giardini Gardens in Venice, where the central and national pavilions of the Biennale are located.

Ahyeon-dong was in the middle of redevelopment when I lived there and, as a result, the evacuation of the neighborhood had already been carried out halfway. Meanwhile, the Giardini of Venice featured in the video shows the time when the Biennale is not in full swing. In fact, it shows when preparations for the event were still in progress and, particularly at times of sunrise and sunset, when no human beings appear on the scene except some homeless people. Consequently, I felt that these two places had something substantially in common.

With scenes of the two places overlapped in my work, I intended it to reveal a particular sort of movement that emerges from this peculiar sense of distance. What I also had in mind while working on the piece was the idea of “wholeness.” There are certain definitions we agree on with regard to the word “wholeness,” such as harmony, desirability, correctness, etc. However, all of us tend to live our lives wandering between excess and deficiency, always yearning for this “wholeness.”

The title “Doubles and Halves” also implies that joining together half of one piece and half of the other piece doesn’t necessarily make a whole. This idea can also be understood in a broader context - in terms of our social and political being.


Also included is “Non-Indepliables” (Non-Unfoldables), a group of laundry racks wrapped in fabric and knitted material that has occupied a big part of your work since 2006. Could you tell us more about the recent 2009-11 series as well as the original one (2006)? 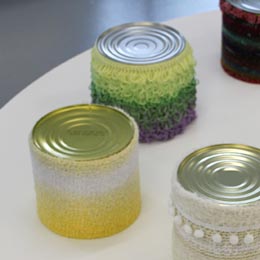 “Can Cosies” (2010-11), Yang’s ongoing series of cans with knitted covers, reflects the artist’s interest in the interface between public and private.

This group of works contains a double negative in its title. A laundry rack is intrinsically foldable; however, as I wrap them with fabric or knitted material, they become “unfoldable.” However, they then become “non-unfoldable” as they now come to have their own “character” - something significant that has a story to tell us - through the process of wrapping and dressing. In other words, they are physically unfoldable after the wrapping, but “non-unfoldable” now that they have a new meaning and significance as beings.

What makes my recent series different from the earlier one is that it now employs new materials with their own narratives that could add further meaning to them - such as PLO scarves, rainbow-striped cloth (that is often used to make traditional Korean garments for children) and cloth from traditional Japanese kimonos - instead of the plain cloth I used for my previous work.

You have worked in a variety of media, including video, installations and performance. Which medium do you think suits you best?

I don’t think there is such thing as a “best medium” for me. Rather, it would be appropriate to say that there is no medium that characterizes or represents me. While I prefer using nontraditional materials or media, I think I usually find my “best medium” for a given work in the process of working on a subject or idea that interests me, not vice versa.

It appears that your individual works often form a constituent part of a family of objects. What causes this?

There is a professional term, “intercontextuality,” which means that when an artist grows to have rich context on which she can build her work, she is then able to “play” within it. Let me put it this way: If a lake grows bigger than before, then it is possible that it has more diverse landscapes in itself. When I look back on my work 10 years ago and compare it with my present work, I feel that such “intercontextuality” has developed in my work.

What is your ultimate goal as an artist?

I think there is a fine difference between what is “important” and what is “significant.” I am much more interested in what is significant and delivering it to those who view my work. There is one more thing: I will not go on with my work if my body and mind don’t keep up any more. I would rather quit unless I can make the most of my ability as an artist. Of course, there are many great artists who impress you by continuing their work until their death, but I don’t see myself doing it. Or you never know .?.?. there is nothing certain about life and we all change in the course of our lives. And that is exactly why life is interesting.