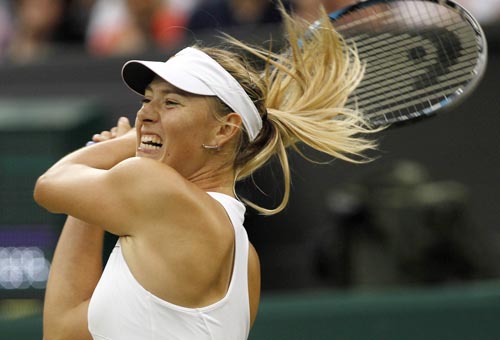 Russia’s Maria Sharapova returns a shot to Slovakia’s Dominika Cibulkova during their match at the Wimbledon Championships, Tuesday. [AP/YONHAP]


LONDON - Maria Sharapova swaggered into the Wimbledon semifinals with a formidable display every bit as spectacular as the thunder claps that rattled the All England Club on Tuesday.

The Russian fifth seed, the stand-out name in an unfamiliar looking last eight, roared to a 6-1, 6-1 win over shell-shocked Dominika Cibulkova under Centre Court’s roof and now only wildcard Sabine Lisicki stands between Sharapova and her first final here since she won the tournament in 2004.

Lisicki continued her heart-warming run when she outlasted French live wire Marion Bartoli 6-4, 6-7, 6-1 to become the first German woman to reach the semis since Steffi Graf in 1999.

Both matches were played out in the slightly surreal atmosphere of a covered court after Monday’s sticky heat gave way to rumbling storms. 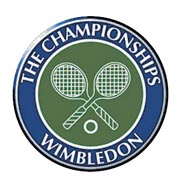 Play was eventually possible on the roofless No. 1 Court, where Petra Kvitova of the Czech Republic beat Bulgaria’s Tsvetana Pironkova 6-3, 6-7, 6-2 in just over two hours to set up a semifinal against fourth seed Victoria Azarenka.

Belarussian Azarenka reached her first grand slam semifinal when she thrashed 20-year-old Austrian Tamira Paszek 6-3, 6-1 in a match that started on No. 1 Court but was switched to Centre Court after rain returned.

Azarenka, whose on-court decibel level has often eclipsed her tennis, said a talk with her mother earlier this year had helped her become a grand slam contender rather than a student.

“After the tournament in Doha I didn’t really want to play tennis,” she told reporters. “I just wanted to go home and rest.

Sharapova became the clear favorite for the title after Monday’s fourth-round carnage in which defending champion Serena Williams, her sister Venus, the five-time winner, and world No. 1 Caroline Wozniacki all bowed out.

The broad-shouldered 24-year-old lived up to that billing with an unrelenting display of high-voltage tennis to demolish a player she towered above both in stature and class.

“I haven’t been at this stage in Wimbledon in a few years, so this feels great,” former world No. 1 Sharapova, who had not lasted beyond the quarterfinals at the grasscourt slam since 2006, told reporters after her hour-long win.

“I would have loved for it not to have taken that long, but I’m not complaining. It’s the road that you sometimes have to take. It’s not always straight. There are a lot of zigzags.”