Broadsided in typhoon: a village’s breakwater

Broadsided in typhoon: a village’s breakwater

The season’s fifth typhoon swept into Gageo Island in South Jeolla on Sunday, damaging the harbor’s breakwater. The damage cost about 1.9 billion won.


SHINAN, South Jeolla - A very unwelcome guest visited Gageo Island in South Jeolla early Sunday. Typhoon Meari, with a speed of 34.8 meters (114 feet) a second, along with 5.8-meter-high seas surged toward the island.

Waves crashed over the 12-meter-high breakwater on the island’s shore and hit the village, forcing residents to escape to a nearby mountain. When the typhoon finally died down, villagers were shocked to see that hundreds of tetrapods, or four-legged concrete structures, had vanished. The damage was estimated at 1.9 billion won ($1.7 million).

Thousands of tetrapods had been piled up along the 490-meter breakwater. Sunday’s typhoon also washed away concrete blocks set outside the breakwater that were twice as large as the tetrapods.

And the Gageo Islanders’ longtime dream of having a safe and sound breakwater was shaken.

After being started in 1978, the construction of the breakwater was finally been completed in May 2008. It cost 132.5 billion won.

It was a terrible deja vu: the islanders had to suffer the power of nature last September as well, when Typhoon Gonpas hit the island. Gonpas destroyed the walls of Gageo harbor and swallowed hundreds of large concrete barriers surrounding the island’s newly established breakwater. 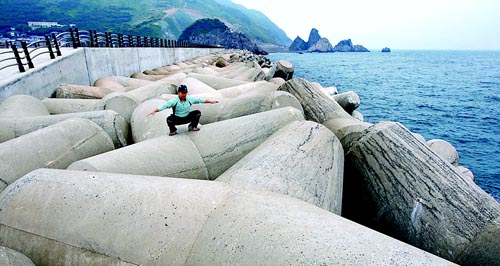 About 6,000 tetrapods and 600 cube blocks were installed along the breakwater of Gageo Island’s fishing port before Typhoon Meari hit. [NEWSIS]


The battle against the elements began after a typhoon hit Korea in 1976, sinking 579 ships and killing 350 people. The government decided to build a harbor in Gageo Island as an emergency evacuation site.

The completion was delayed each time and the initial budget of 30 billion won increased more than three-fold. The weight of the tetrapods increased each time construction resumed - from 25 tons to 32 tons to the current 64 tons.

Moreover, 108-ton cube blocks were installed outside of the breakwater, making Gageo Island harbor the only fishing port in Korea to have cube blocks. Before Meari hit, the port was protected by 6,000 tetrapods and 600 cube blocks, more than double that of other breakwaters in Korea. Generally, about 2,000 to 3,000 tetrapods protect a 500-meter breakwater of a fishing port and the weight of the tetrapods is usually 32 tons. However, despite the massive construction, the breakwater did not hold up well to Typhoon Meari.

Lee Hyun-woo 52, manager of Sambu Construction Co., which completed the breakwater in 2008, said more work is necessary because the area is especially vulnerable to the effects of typhoons. Larger tetrapods and cube blocks should be added or the size of the breakwater should be expanded, he said.

“The breakwater was constructed with the latest technology but it still was insufficient to protect the island from Meari,” said Lee. “More money should be invested to build a stronger breakwater.”